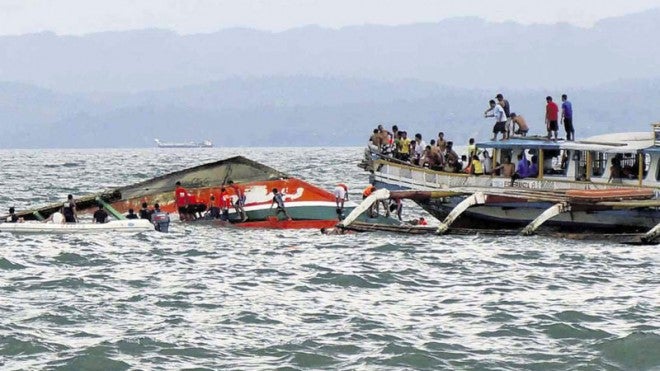 DISASTER AFTER MIDDAY Rescuers search the hull of the MB Nirvana for survivors after the wooden outrigger ferry capsized in rough seas off Ormoc City after midday on Thursday. At least 35 of the nearly 200 people on board the vessel died in the accident. CONTRIBUTED PHOTO FROM MIQUICAR PHOTO STUDIO

ORMOC CITY, Philippines—Shortly after leaving port on Thursday, crewmen of the ferry MB Nirvana asked their nearly 200 passengers and crew to put on life jackets because of huge waves.

William Donaire, 52, ignored the announcement, confident he was safe because there was no typhoon signal.

Another passenger, Mary Jane Drake, Filipino wife of a retired American firefighter, described the panic she saw and the screaming she heard when the Nirvana capsized.

“No one was able to jump out because the boat overturned very swiftly. There was no time to jump,” she said.

Her husband, Lawrence Drake, a former firefighter from Rochester, New York, said he ran to one side of the boat to try to balance it but it was too late.

“I jumped out of my seat and ran to the front as far as I could, and tried to lean over. I am a big guy, and tried to push the boat back over but it was way too late,” Drake said.

Within seconds, the boat overturned, many passengers screaming in panic, he said.

The passengers were all bound for Pilar town on Camotes Island, east of Cebu province.

At least 35 people drowned and 134 others were rescued by the Coast Guard, the Philippine National Police, the Armed Forces, the Bureau of Fire Protection and local government units.

READ: At least 35 dead as ferry capsizes off Ormoc City

Twenty others were missing, the Coast Guard said, putting the total number of people on the boat at 189—173 of them passengers and the other 16 crew members.

Donaire was among those who survived.

Big waves hit the Nirvana at past noon as it was turning to the right, about a kilometer away from the port of Ormoc City.

People at the port, including Poro Municipal Councilor Augusto Zurita, screamed when they saw the motorboat capsize.

‘It happened too fast’

Some covered their mouths in disbelief but most felt helpless as they watched the passengers of the Nirvana jump off the vessel.

“It happened so fast. When the vessel left the port, it turned (to the right) but it was done too fast and it was hit by big waves. The vessel then capsized,” Zarita said.

Donaire survived with wounds mostly in his arms and hands.

“I regretted not wearing a life jacket. I should have listened to the announcement,” he told the Inquirer.

He said that when the vessel capsized, he jumped into the water. Since he could not stay afloat without a life jacket on, he swam to the exposed hull and hung on to it even if there were seashells that were cutting through his flesh.

Other passengers held on to him.

Donaire didn’t let go. He said he didn’t look at the other passengers and didn’t know what happened to them. He just closed his eyes and prayed.

His prayer was answered as he was among the passengers rescued by the coast guard. 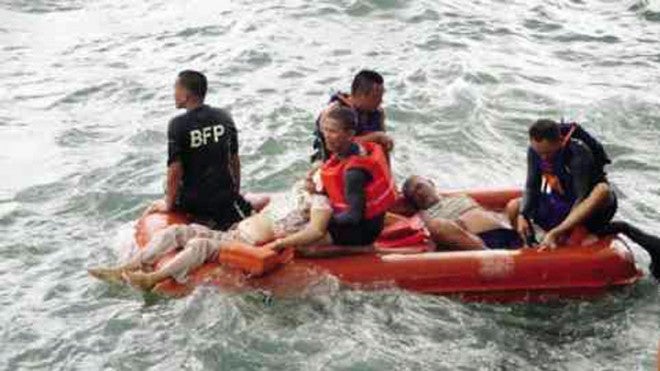 SEARCH AND RESCUE A rescue team tries to save the lives of passengers and crew of the MB Nirvana in Ormoc City, Leyte province, on Thursday. At press time, 134 have been rescued out of nearly 200 passengers. JHAY GASPAR/INQUIRER VISAYAS

Donaire came from Pilar town in the Camotes Islands with his sister, Wilma Bisto, and her husband Luis to buy supplies in Ormoc. Pilar is about an hour by boat to Ormoc.

Donaire was worried about his brother-in-law, Lito, one of the missing. His sister survived.