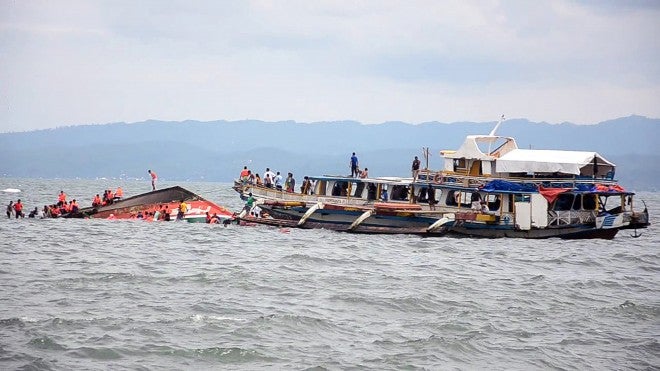 The Coast Guard rescues passengers after a ferry boat capsized in choppy waters on July 2 in Ormoc. AP

ORMOC CITY—Shortly after leaving the port, crew members of a passenger motorboat asked their passengers to put on life jackets because of the huge waves.

But William Donaire, 52, ignored the announcement, confident that they were safe because there was no typhoon signal.

Big waves, however, hit MB Nirvana as it was turning to the right, about a kilometer away from the port of Ormoc City, past noon on Thursday.

The boat capsized with 173 persons on board—all bound to Pilar town on Camotes Island, east of Cebu.

At least 36 passengers died while 129 others were rescued by joint team from the Coast Guard, police, Armed Forces, Bureau of Fire Protection and local government unit.

● At least 36 dead as ferry capsizes off Ormoc City

People in the port, including Poro Municipal Councilor Augusto Zurita, screamed when they saw the motorboat suddenly capsize.

Some covered their mouths in disbelief but most felt helpless as they watched the passengers of MB Nirvana jump off the vessel.

“It happened so fast. When the vessel left the port, it turned (to the right) but it was done too fast and it was hit by big waves. The vessel then capsized,” said Zurita.

Among the survivors was Donaire, who had wounds mostly on his arms and hands from the shells on the exposed hull of the boat where he hung on to survive.

“I regretted not wearing a life jacket. I should have listened to the announcement,” he told the Inquirer.

He recalled that when the vessel capsized, he jumped into the waters. Since he could not stay afloat without a life jacket on, he swam to the exposed hull and held on to it even if there were seashells that were cutting through his flesh.

Other passengers, who were also scrambling to survive, tried to hold on to him while he was hanging on the exposed hull.

But Donaire didn’t let go. He also didn’t look at the other passengers and know what happened to them. He just closed his eyes and prayed to be rescued.

His prayer was answered as he was among the passengers rescued by the Coast Guard.

Donaire came from Pilar town in Camotes with his sister Wilma Bisto and her husband Luis to buy supplies in Ormoc.

Pilar residents prefer to buy their supplies in Ormoc because it is nearer compared to Danao City in mainland Cebu.

Pilar, which is part of Camotes Group of Islands, is about an hour by boat to Ormoc and more than two hours by boat to Cebu.

Donaire said he bought one sack of rice using money given by his sister. Now, he said, he was worried where to get rice for his wife and two children.

He was also worried about his brother-in-law who was one of the missing. His sister survived.

Eduardo Pastoran, 52, thought it was his end.

The father of six from Pilar town said he had to hang on to a floating bamboo nearby to survive.

“There were cries all over. Passengers, including children and old people, jumped into the sea. I thought I would die,” he said.

While floating on the bamboo, he was able to pull four people and make them hang on until they were rescued by the Coast Guard about 30 minutes later.

While waiting for the rescuers, he saw five bodies floating on the water.

Pastoran together with 57 others were brought to the Gatchalian Hospital.

He was thankful he survived.

“This is my second life and now I am only thinking of my wife and children who I am sure are worried about me,” he said.

He said he went to Ormoc to buy materials for his vehicle. He took the same boat at 8 a.m. on Thursday and was supposed to go home at noon also through Nirvana.

Ray Ann Garciano, 27, and a resident of Poro town in Camotes, was also worried about her sister-in-law Marilou Gonzaga who remained missing.

“Naguol sad ko sa P1,000 worth nga consumo nga akong gipamalit para sa akong mga anak (I felt sad about the P1,000 worth of groceries that I bought for my children),” she added.

Garciano said she and Gonzaga put on the life jacket when told by the crew members.

Then she saw the big waves hitting the motorboat, while Nirvana was making a turn after leaving the port.

When the vessel capsized, she immediately jumped into the waters.

Garciano said she was floating in the waters for more than 10 minutes when she was rescued by the Coast Guard.

Among the fatalities was the cousin of Pilar Mayor Jesus Fernandez Jr. who also served as his private secretary.

Fernandez said there were three motorboats, including Nirvana, that plied the Pilar-Ormoc route.

But on Thursday, only Nirvana served the route because the two others had mechanical problem.

Also among the fatalities was Sonia Moreno, principal of the Pilar National High School who went with teachers for a short vacation after receiving their performance evaluation incentive.

Fernandez was coordinating with Ormoc officials on how the survivors would be brought back to his town, said Julius Regner of the Cebu provincial disaster risk reduction and management office (PDRRMO).

Regner said some survivors claimed that the vessel may have capsized due to overloading of passengers and cargo, aside from the rough seas.

“There were a lot of cargoes mostly cement and sacks of rice,” he said.

But Seawoman 1st Class Ermelyn Laude of Coast Guard Ormoc City said there were 173 passengers on board, less than the passenger capacity of 178.

The crew was headed by its skipper Warren Oliverio.

Oscar Tabada, head of the weather bureau based on Mactan Island in Cebu, said the rough seas were caused by the habagat and the low pressure area in Bicol region.

In Cebu, wind velocity was recorded at 57 kilometers per hour when it rained at 12:30 p.m.

“This kind of wind usually brings big waves,” he said.

A command center manned by the police, Coast Guard, Bureau of Fire Protection and the military, has been set up at the port area to oversee the search and rescue operations.

He said divers have going to and from the capsized vessel to rescue its passengers and retrieve the dead bodies.

The hull of Nirvana remains visible from the port area. With reports by Jhunnex Napallacan, Doris C. Bongcac and Joey A. Gabieta, Inquirer Visayas