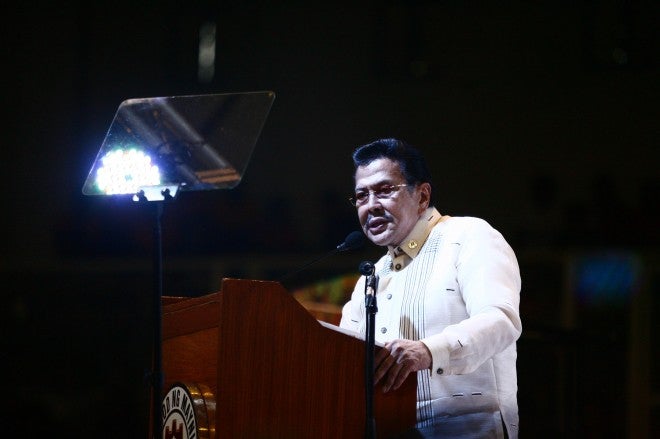 In a report by Radyo Inquirer 990AM, Ejercito said his father was no longer an official of UNA after it was formally launched as a new political party before thousands of supporters and allies at Makati Coliseum on Wednesday.

Estrada was considered one of the so-called three pillars of the then UNA coalition alongside Binay and Sen. Juan Ponce Enrile. In the 2013 elections, UNA was a merger between Estrada’s PMP and Partido Demokratiko Pilipino-Lakas ng Bayan.

Ejercito made the clarification amid speculations Estrada’s absence at the UNA rites meant reluctance in supporting Binay in the upcoming presidential elections.

While Estrada said his nonappearance did not mean automatic support for potential presidential bet and his goddaughter Sen. Grace Poe, he said he would still study whom to support between Binay and the daughter of his close friend the late Fernando Poe Jr.

READ: Absence at UNA launch does not mean support for Poe, says Estrada

Echoing his father, Ejercito said his family would have a difficult time deciding whom to support in 2016 if Senator Poe decided to run for president, but added the relationship between the Binays and Estradas was beyond politics.

In an interview with reporters, Sen. Nancy Binay said Estrada’s absence at the UNA rites was understandable, noting the ties between their families had always been well.

UNA spokesperson Mon Ilagan also said he was confident Estrada would not let Binay down, adding there would be no hard feelings in the event the former president decided to support Poe. With a report by Robert Vergara, INQUIRER.net trainee