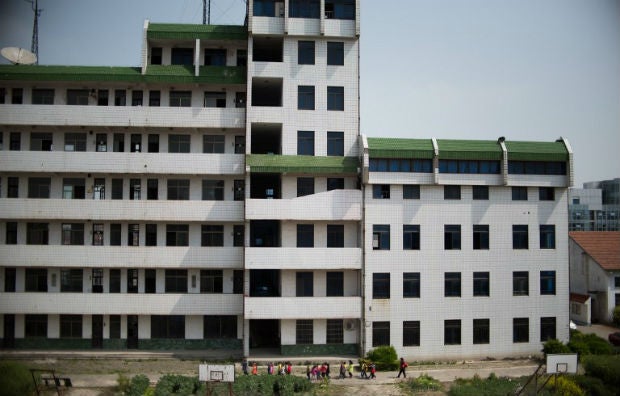 This photo taken on April 17, 2015 shows children (bottom C) walking in the schoolyard of the once-bustling Technical Secondary School in Rudong, Jiangsu province. Rusty padlocks seal empty classrooms and blank graduation certificates litter a dusty, silent school corridor in Rudong, a haunting glimpse of China’s aging future in a town which pioneered the one-child policy. One fifth of Rudong’s million-strong population is above 65 years old, making it the first place in China to be classified as “super-elderly”, according to state media. AFP

Education facilities are being shrunk to cater for dwindling pupil numbers, and the once bustling Technical Secondary School is now a hollow eight-story shell.

Long before China’s Communist rulers rolled out the one-child policy nationwide to halt population growth, Rudong was already carrying out forced sterilizations, abortions and highly personal checks on women on its own initiative.

It was praised by the authorities for its strict enforcement of the rules that became the cornerstone of Beijing’s social management.

Now China is facing the consequences of a dwindling workforce and a rapidly ageing population, and Beijing has been loosening the rules to encourage more births.

But those who enforced the drive a generation ago in Rudong, in the eastern province of Jiangsu, remain proud of their work today.

“There was not a single teacher in our school with more than one child,” said Shi Dejun, a retired doctor who was responsible for checking female staff members at the now abandoned school.

“Rudong is China’s model for family planning, and this school is the model for Rudong,” he added, standing on a disused playground littered with shards of glass and weeds burrowing through cracks in the concrete.

China has long defended the one-child policy as a key factor in the country’s rising prosperity — sentiments echoed by Shi.

“Most of the young have the opportunity to work overseas or in developed cities like Shanghai because of the one-child policy,” he said.

But Chinese experts expect the country’s working population — estimated by the government to be roughly 915 million at the end of 2014 — to drop by around 40 million by 2030.

In Rudong itself one fifth of the million-strong population is above 65 years old, making it the first place in China to be classified as “super-elderly”, according to state media.

It boasts a newly built University for the Elderly, one of a network of thousands that have been built in China in recent years where seniors can study anything from languages to IT skills.

Rudong is three hours north of Shanghai and many of the younger generation have moved away for work, leaving their own children in the care of their grandparents.

Near the university, dozens of aged childminders waited to meet their charges at the end of the school day.

“Caring for one’s grandchild is what every elderly person in China should do,” said a man surnamed Wang waiting at a school gate.

“My child is busy working to support for us all. It is hard, but that is life across China now,” he added.

At People’s Park, a pagoda-lined green space straddling a canal cutting through Rudong on its way from the Yangtze river to the East China Sea, a newly married couple having their pictures taken were among the few 20-something faces to be seen.

“We have moved here from out of town, and we never realised until we got here how few people our age there are,” said the groom.

Only one third of young people who leave Rudong to study at university return to the area, research cited in the Southern Weekly newspaper said, with many finding jobs elsewhere upon graduation.

Wedding photographer Sun Yang rued the effect of demographics on his business.

“I used to take photographs for over a 1,000 couples a year, but it is almost half that now,” he said.

Dragged to the clinic

The costs are heavy for both communities and individual families.

Nantong, the municipality that includes Rudong, said last year it would create another 4,200 retirement home beds, while the younger generation struggles to support its elders.

The son is the traditional breadwinner in extended Chinese families, and the nuclear family usually supports the husband’s parents. But Zhang Yufang’s son died from illness nine years ago aged 33, leaving his widow — who makes only 2,000 yuan ($320) a month) selling cosmetics — to support both their daughter and his mother.

“We are under huge financial pressure,” Zhang said, wiping tears from under her glasses in her farmhouse in the rice-growing village of Wuzong, on Rudong’s outskirts, as she looked at old photographs of her son, Chen Jinjun.

Soon after he was born in 1973, she conceived a daughter, only ensuring she was born by hiding her condition from officials.

But, under Chinese cultural norms, her surviving child provides little financial support for the 69-year-old.

After her daughter’s birth, Zhang had no choice but to undergo a forced sterilisation, she said.

“There was nothing I could do to prevent it,” Zhang said, recalling the moment her husband dragged her to the clinic under the watch of officials.

“If I’d had one more child, that would ease a lot of pressure on my family.”