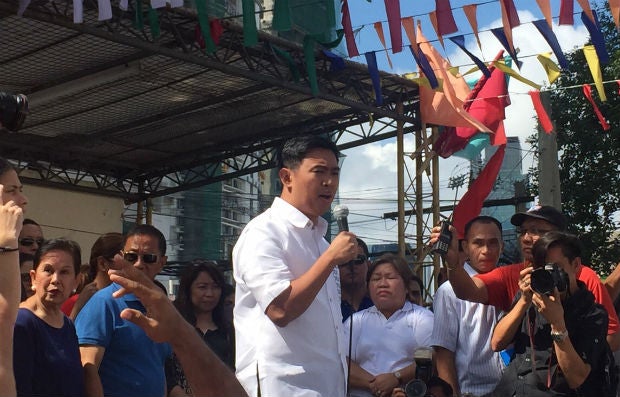 Makati Mayor Junjun Binay on Wednesday vacated his post while awaiting the Court of Appeal’s decision on his plea for a temporary restraining order on his suspension by the Ombudsman.

“Ako ay pansamantalang bababa sa pwesto,” (I will temporarily step down from my post) Binay, the son of Vice President Jejomar Binay, said in a televised press conference.

Later, Binay went outside city hall, and assured supporters that their fight was far from over.

He was flanked by his father, the Vice President; mother Elenita, and siblings Senator Nancy and Makati Representative Mar-len Abigail.

Mayor Binay said he had to respect the Court of Appeals which withheld a decision on his plea pending comment from the Ombudsman.

Nevertheless, the suspended mayor told his supporters, “Hindi po dito nagtatapos ang laban natin. Hindi po namin kayo iiwan. Masakit man po, kailangan po nating gawin.” (This is not the end of our struggle. We will not leave you. It hurts but we have to do this.)

“Di ko kayang tiisin na may nasasaktan, may karahasan sa lungsod at naabala ang mamamayan,” (I cannot bear seeing you get hurt. There is violence in the city and the people are inconvenienced) he said.

After his speech, Mayor Binay tightly hugged his father.

Chants of “Binay! Binay!” echoed at the city hall grounds as the Binay family walked off the stage.

The Binay camp refused to receive a copy of the preventive suspension order, imposed upon the Makati local government by the Ombudsman pending its preliminary investigation over the criminal and administrative charges against them.

The Makati standoff escalated on Tuesday when some of Binay’s supporters threw monoblock chairs at the police barricade at the Makati city hall.

Even Vice President Jejomar Binay joined in the conflict when he allegedly confronted Senior Superintendent Elmer Jamias when the latter prevented him and some supporters from entering the city hall  on Monday night.

Jamias, who said he will file charges  of physical injury, direct assault on a person of authority, oral defamation and grave threat against  the Vice President, said Binay allegedly badmouthed him and  collared Chief Inspector Gideon Gines for purportedly pushing away Aida Dizon, the sister of his wife Dr. Elenita Binay, when she tried to enter the City Hall. Gines denied Binay’s claim.

According to the special panel of Ombudsman investigators, Mayor Binay and 14 others “mutually aided one another” in the rigging of the procurement and award of the P17.3 million contract for the architectural design and engineering services to favored pre-selected bidder Infiniti Architectural Works from 2007 to 2008.

Republic Act 6770 or the Ombudsman Act gives the Ombudsman powers to suspend a public official over administrative charges if the evidence of guilt is strong, and the charges against the official involve dishonesty, oppression or grave misconduct or neglect in performance of duty

The Ombudsman can also suspend an official for six months to prevent an official from using his or her position to thwart the probe.

The Ombudsman already suspended Mayor Binay  on the separate charges of overprice in the Makati City Hall Building II  on March 11  but this was later stalled by the Court of Appeals.

The issue on whether or not the Ombudsman can suspend a reelected official is now pending before the Supreme Court. Mayor Binay’s lawyers had cited the Supreme Court ruling which institutionalized the Aguinaldo doctrine, which states that an official may be condoned from charges involving his or her past term following his or her reelection.