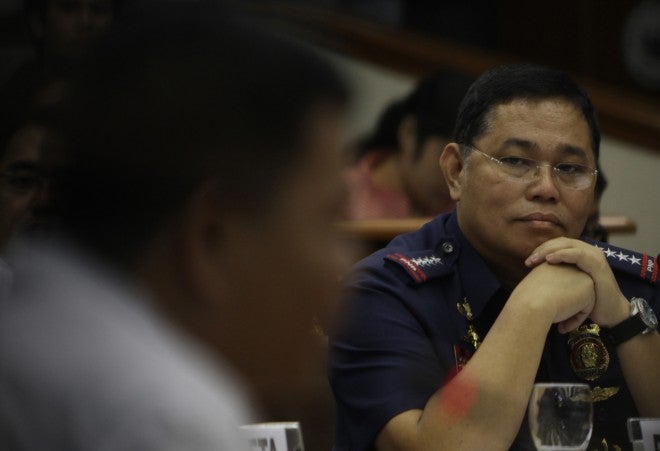 For serious dishonesty and grave abuse of authority, Director General Alan Purisima, the former Philippine National Police chief, and 10 PNP officers were dismissed from the service for entering into an anomalous contract with an unregistered courier service firm to deliver firearms licenses.

Ombudsman Conchita Carpio Morales announced on Tuesday that she found substantial evidence of wrongdoing by Purisima and the other PNP officials over the exclusive contract given to Werfast Documentary Agency Inc. in 2011 to order their dismissal on the grounds of administrative liability.

She also ordered the retirement benefits of the men forfeited and perpetually banned them from working in government.

Purisima and the 10 other PNP officials as well as seven Werfast representatives will still face an investigation for graft, according to the Ombudsman.

While serving his suspension, Purisima resigned as PNP chief over the Mamasapano controversy.

Petrasanta is serving another Ombudsman-ordered suspension for six months until July 5 over another case involving the loss of 1,004 AK-47 rifles that were later traced to the New People’s Army during his stint as FEO chief.

Malacañang withheld making a statement on the Ombudsman’s dismissal of Purisima and other police officers.

“We will wait for the official copy of the resolution from the Office of the Ombudsman for us to be able to properly address this matter,” Communications Secretary Herminio Coloma, Jr. said late Tuesday afternoon.

Aquino trusted Purisima so much that he continued to consult the police official on police counterterrorism efforts even when the latter was serving a six-month suspension stemming from the Werfast contract.

The Ombudsman said the PNP under Purisima gave Werfast the exclusive contract to deliver renewed firearms licenses even though it had no track record as a courier company, lacked enough capital and did not have the manpower and logistical capability to make deliveries around the country.

“Evidence shows… (Purisima) himself exerted pressure and coercion over his subordinates on behalf of Werfast,” Morales said in a statement issued Tuesday afternoon.

The Ombudsman said then FEO chief Estiles entered into a memorandum of agreement with Werfast in May 2011 without undergoing the procurement, accreditation and qualification process.

Petrasanta, as then chair of the technical working group, recommended in June 2011 that Werfast be the exclusive courier.

At the time, the Ombudsman found Werfast was not a registered corporation since it was only incorporated in August 2011 with a P65,000 capital.

The company did not meet the required capitalization of P500,000 to operate in more than two regions, the Ombudsman said.

The Ombudsman said Meneses, who was then chief of the PNP Civil Security Group, submitted a memorandum to Purisima in February 2013 recommending that the delivery of license cards by courier service be made mandatory and that Werfast had been accredited.

The Ombudsman said the FEO CSAB disregarded the criteria when it accredited Werfast, which did not submit a clearance from the PNP directorate for intelligence, did not have the authority to operate as a courier service and lacked accreditation from the Department of Science and Technology.

Werfast had no track record as a courier service or any other business, and turned to another courier company, LBC, to fulfill its obligation since it had no machinery, manpower and logistics capability, the Ombudsman said.

The Ombudsman Fact-Finding Investigation Bureau earlier said that the PNP officials “siphoned off the mandatory delivery fees” the FEO had collected from gun owners for the delivery of their gun licenses.

The fact-finding bureau said Werfast contracted the services of LBC and charged gun owners P190 for deliveries in Metro Manila and P290 in the provinces. LBC was charging its clients only P90 for the service, it said.

“Evidence shows not only that Purisima knew what he was doing in signing the Meneses memorandum but he himself exerted pressure and coercion over his subordinates on behalf of Werfast,” Morales said.

The PNP terminated the contract with Werfast in March 2014 amid the complaints filed by a private citizen and the Deputy Ombudsman for military and other law enforcement agencies.

Sought for comment, PNP spokesman Chief Supt. Wilben Mayor said the PNP “has not yet received any official document from the Ombudsman on the matter.”

Requests for comment from the camp of Purisima and Petrasanta were unanswered as of press time.–With reports from Nikko Dizon and Julie M. Aurelio