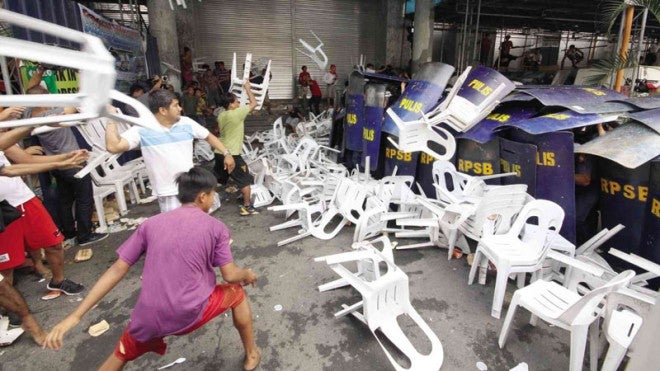 MONOBLOC MISSILES IN MAKATI Supporters of Makati Mayor Junjun Binay, who has been ordered suspended anew by the Ombudsman, hurl Monobloc chairs at a phalanx of policemen using their shields like soldiers of the Roman Empire to protect themselves. The policemen were trying to enforce the suspension order. JOEL LIPORADA/CONTRIBUTOR

“This is about the right of the Filipino people to hold their public servants to the highest bar of accountability.”

Some 700 policemen, armed with truncheons and shields, descended before dawn Tuesday on Makati City Hall and sealed off all its entrances.

The Vice President and his son had spent the night in the building, only to find a six-month suspension order from Morales against the younger Binay in connection with her investigation into allegations of corruption in the construction of the 10-story Makati City Science High School building.

Maria Lourdes Agustin of the Department of the Interior and Local Government (DILG) had posted the 12-page order on the main steel door.

Hours later, Vice Mayor Romulo “Kid” Peña was sworn in by Assistant Prosecutor Julius Ceasar Gauran as acting mayor of the city. He urged the mayor to “follow the law.”

Peña’s bodyguards wearing black jackets and riding on motorcycles—he is a biking enthusiast—began roaming the city.

The Vice President later came down to confront the police ground commander, Senior Supt. Elmer Jamias, to remove the barricades around City Hall. TV cameras caught him wagging a finger at Jamias, accusing him of harassing his family and the city government.

“Chief Insp. Gideon Ines refused to let the Vice President in the area so some of the supporters got angry and there was a short scuffle,” said Binay’s spokesman Joey Salgado.

Asked about Jamias’ plan to file cases of assault upon person in authority and threat and oral defamation against the Vice President and some of his men for the incident on Monday night, Salgado said: “We would like to remind them that the Constitution here in the Philippines should still rule. It seems like they are imposing a martial law-like situation in the city.”

Salgado said the people had the right to assemble and express support for the mayor.

Tensions rose as Binay supporters tried to push their way through police barricades and started throwing monobloc chairs at the lawmen.

Some employees of City Hall claimed the police started the scuffle and pushed the people away from the entrance.

Several people were reportedly injured in the commotion. Christine Ramirez, an employee of Makati Action Center, presented a medical certificate from Ospital ng Makati showing that she sustained bruises on both her arms after the policemen allegedly pushed her with their shields. Barangay (village) officer Eric Enriquez said he was hit on the head by a police truncheon.

“I just wanted to get inside the building because we had to work today,” Ramirez said, noting that the police continued pushing her and the rest of the crowd gathered near the entrance of City Hall.

Interior Secretary Mar Roxas said the Philippine National Police would request TV networks copies of their footage on the exchange between Binay and Jamias.

“We will see the footage to see who threw punches, who pushed a policewoman, who collared who while the PNP was carrying out its peace and order duties at City Hall,” Roxas said.

Those found to have prevented the policemen from carrying out their duties could be charged with obstruction of justice, he said.

Jamias said the Vice President threatened him while some of Binay’s followers allegedly manhandled some policemen, including a policewoman.

In the TV footage of the confrontation Binay was heard saying, “Marahas ka sa tao (You have abused the people).”

Roxas identified the injured policewoman as PO1 Periet Esguerra, who sustained a bruise after allegedly being punched by a Binay supporter.

Inspector Ines claimed he was pushed and punched by the Vice President’s bodyguards.

“We will see from the footage that our PNP exercised maximum tolerance and absolute restraint. They were there to enforce the law, not to create chaos,” Roxas said.

Mayor Binay filed Tuesday an urgent petition in the Court of Appeals for the issuance of a temporary restraining order (TRO) on the Morales order—the second suspension directive against him in nearly four months.

The CA raffled off the case to the Tenth Division, but the offices closed Tuesday without a TRO being handed down.

In a statement, Morales dismissed claims by the Binay camp that her office was being used by Malacañang to harass the Vice President and his family, saying it performed its mandate according to law and evidence.

“It will never succumb to any perceived pressure or be blinded or deafened by political grandstanding. It will not tolerate open defiance of constitutional processes or calls for mob rule. This is about the right of the Filipino people to hold their public servants to the highest bar of accountability and to bring them before the bar of justice if they are accused of betraying the public trust,” she said.

“Preventive suspension is not punitive as it is preventive in nature meant to protect the integrity of the investigation process. Public interest requires that those in positions of power and authority do not have the opportunity to tamper with public documents and harass witnesses to frustrate the ends of justice,” she added.

“The second suspension order is disrespect for the Supreme Court as it may render moot and academic the first suspension order. Although the Ombudsman is an independent constitutional body, it should nonetheless respect that the ultimate judicial power is vested in the Supreme Court,” he added.–With reports from Tarra Quismundo, Jovic Yee and Dona Z. Pazzibugan