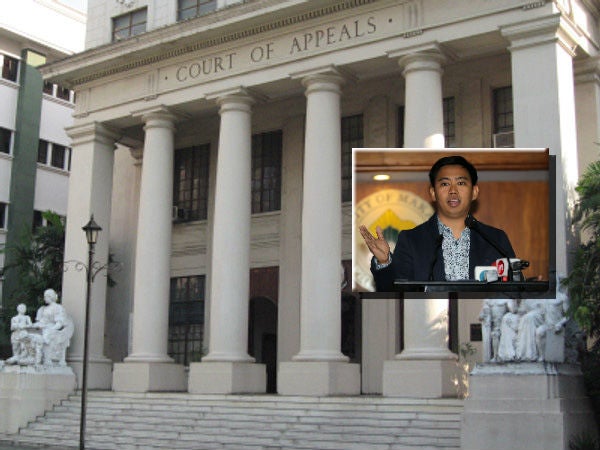 Makati Mayor Jejomar Erwin “JunJun” Binay has asked the Court of Appeals to nullify the order of suspension imposed against him by the Office of the Ombudsman, this time, in connection with the alleged rigged bidding for the construction of the 10-story Makati Science High School (MSHS) Building to favor a preselected bidder.

In his 33-page petition, he also urged the appeals court to issue a temporary restraining order (TRO) against the implementation of the six-month preventive suspension order imposed against him.

On Tuesday morning, officials of the Department of Interior and Local Government posted the suspension order against Binay at the entrance of the Makati City Hall amid violent opposition from his supporters. His Vice Mayor, Romulo “Kid” Peña was sworn in as acting mayor.

This is the second petition he filed with the Court of Appeals. The first was to stop his preventive suspension for the allegedly overpriced Makati City Hall Parking Building.

On the first case, the Court of Appeals issued a 60-day restraining order which later became an injunction, to indefinitely stop the implementation of the suspension order until his petition is resolved. The Ombudsman went to question the Court of Appeals’ decision before the Supreme Court which conducted an oral argument on the case. The petition is still pending.

In his latest petition,  Binay said Ombudsman Conchita Carpio-Morales committed grave abuse of discretion in issuing the suspension order even without evidence showing how he rigged the bidding or conspired with other respondents to rig the bidding.

Under Section 24 of the Ombudsman Act, any officer or employee may be preventively suspended pending an investigation when the evidence of guilt is strong.

In this case, however, Binay said  Carpio-Morales merely relied on the sworn statement of  Engineer Mario Hechanova, former head of the Makati City government’s general services department. Hechanova said he got orders to rig the bidding from Binay through a certain Eng. Nelson B. Morales.

Quoting a Supreme Court decision, Binay said “when the evidence is based on what was supposedly told by the witness, the same is without any evidentiary weight for being patently hearsay.”

“It must be emphasized that there is absolutely nothing in the Joint Order or the said sworn statements that mentions Petitioner (Binay), much less attributes any acts against him…The allegations are considered hearsay and should not have been accorded any probative value by the Ombudsman,” the petition stated.

Binay added that the fact that Engr. Morales is dead, all the more that Hechanova’s testimony should not be given any value since his information could no longer be verified.

Binay also said that the order violated his rights because the Ombudsman tends to suspend him for accusations allegedly committed during his previous term.

In the case of Aguinaldo v. Santos, the Supreme Court ruled that “a public official cannot be removed for administrative misconduct committed during a prior term since his reelection to office operates as a condonation of the officer’s previous misconduct to the extent of cutting off the right to remove him thereof.” IDL