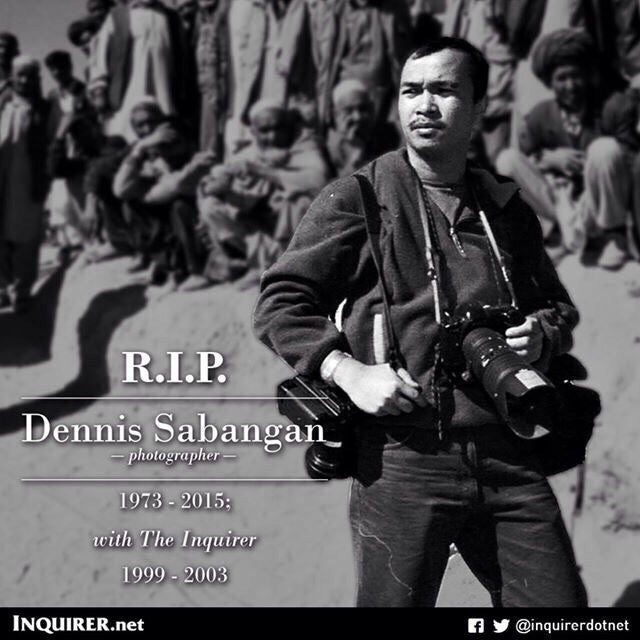 He was the joker, the “life of the party” and the ultimate charmer to his close friends in the media industry.

That was why they were shocked when they learned that Dennis Sabangan, former photographer of the Inquirer, died Monday morning.

Sabangan, accompanied by a nephew, was driving on Katipunan Avenue, coming from his home in Barangay UP Campus, to meet a friend in Makati City when he had a heart attack.

A Metropolitan Manila Development Authority traffic constable, who responded to the nephew’s cry for help, rushed Sabangan to the nearest hospital, Quirino Memorial Medical Center in Project 4, but he was declared dead on arrival at 10:35 a.m. He was 41.

At the time of his death, Sabangan was the chief photographer in Manila of European Pressphoto Agency (EPA). He also worked as a stringer for New York-based Getty Images and Reflex News, and Paris-based KCS Presse and SIPA Press.

Sabangan was also a senior lecturer at the Department of Journalism, College of Mass Communication, University of the Philippines Diliman, where he had been teaching photojournalism since 2009.

The Foreign Correspondents Association of the Philippines (Focap), where Sabangan was a board member, condoled with his family.

“Focap expresses its deepest sympathy to Dennis’ family, close friends and special loved ones. Please say a little prayer for him,” the association said in a statement.

“We all remember Dennis for his excellent coverage from a distinctly human angle, for many assignments around the world, and for his positive attitude that anything was possible,” it said.

EPA, with its “team in the Philippines that he mentored and led with professionalism, warmth, passion and sense of humor,” also expressed its condolences to Sabangan’s family.

Sabangan’s friends knew he had a heart condition and had been weak and frail for the past three months but they never thought he would go too soon.

“He was larger than life,” said Jun Sepe, photo editor of ABSCBN.com.

Sepe described Sabangan as “fun” and “full of laughter,” especially during news coverage, which he said were most of the time “90-percent waiting game and 10-percent actual coverage.”

And yet Sabangan took risks, as he was a veteran of war coverage, whether in Mindanao or in Pakistan and Afghanistan, and of disasters, whether in Sri Lanka in the aftermath of the 2004 Indian Ocean tsunami or in Leyte during Supertyphoon “Yolanda.”

It was his willingness to immerse himself in conflict and disasters to capture events from close quarters that his friends remember most.

“He was so courageous,” said Inquirer photographer Joan Bondoc.

“Nothing could stop him,” said another friend, photographer Bullit Marquez of The Associated Press (AP).

The AP chief correspondent for Manila, Jim Gomez, said his enduring memory of Sabangan was of the photographer shooting pictures from behind a military armored personnel carrier under automatic fire during the Abu Sayyaf siege of a hospital in Lamitan, Basilan province, on June 2, 2001.

“It was comical but you know it was work to him,” Gomez said.

He said he could never forget Sabangan’s fondness for oversized and colorful shades, while Marquez said his friend liked anything that had the North Face brand on it.

Marquez said he, Sabangan, Erik de Castro and Ted Aljibe—chief photographers of Reuters and Agence France-Presse, respectively—formed part of the “Power Papits” and that they never had a dull moment because of Sabangan’s jokes.

Marquez said Sabangan was diagnosed five years ago with an enlarged heart and yet Sabangan was more concerned about his work than his own health.

He said he and Sabangan covered many big events together like the 2008 and 2012 Olympics held in Beijing and London, respectively.

“I will miss the noise we make during a coverage,” Marquez said, adding he lost a good friend who was about to return to work after resting since April.

Inquirer central desk director Juliet Javellana said her image of Sabangan was that of someone “constantly laughing.”

“You’ll know he is in the room when there are bursts of laughter and people gravitate to him. His happiness is infectious, and, of course, his body of work is just amazing,” Javellana said.

No stranger to accolades for his work, Sabangan was recently awarded third prize in the 11th Days Japan International Photojournalism Awards for his dramatic photo series on the demolition of shanties on Agham Road in Quezon City. He titled his collection “Uprooted.”

As former chair of the Philippine Center for Photojournalism, Sabangan fought for the rights of photojournalists and was one of the group’s members who sought to professionalize the industry.

“He wanted people to recognize that photographers weren’t second-class citizens [in journalism], that we are on the front lines,” Bondoc said.

“He took his profession quite seriously. We’re still in shock at what happened,” said Danilo Arao, an associate professor at the UP Department of Journalism.–With reports from Jinky Cabildo and Matthew Reysio-Cruz, trainees