Luistro shows tougher side in UP speech 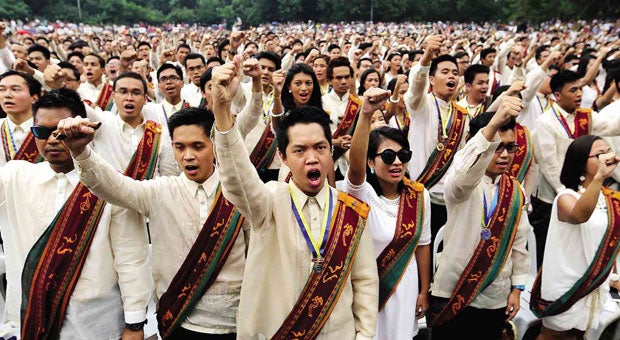 ‘UP NAMING MAHAL’ University of the Philippines graduates sing “UP Naming Mahal” during Sunday’s commencement exercises at University Theater on the UP Diliman campus in Quezon City. Some graduating students used the occasion to protest the introduction of the controversial K-12 education program in the Philippines. RAFFY LERMA

It’s easier to gripe and complain in the streets and on social media than to sit down and provide solutions to the country’s various problems.

Education Secretary Armin Luistro came out swinging at critics of the government on Sunday during the 104th commencement exercises of the University of the Philippines Diliman.

Luistro was guest speaker at the first UP graduation rites to be held in June, after the state institution shifted its academic year from June to August.

“It’s easier to run around naked with cloth covering one’s face than to advocate for solutions to help solve poverty,” Luistro said in his speech, referring to the university’s annual Oblation Run.

“It’s easier to shout on the streets and burn effigies than to sit down in talks to find long-lasting solutions to end hunger, ignorance and climate change.”

He said it was also a lot easier to spend time and energy on “pointless commentaries on social media, especially if one is not using his real name.”

As at every UP graduation, student activists made their presence felt, twice. First by raising signs during Luistro’s speech calling for the suspension of the Department of Education’s K to 12 basic school curriculum and then holding a short rally in front of the graduates as the nearly four-hour-long rites came to a close.

College of Mass Communication student chair Bea Carolino said that while they respected Luistro’s views on protests, the education secretary must be reminded that “if there are protests, it means the people see there’s something wrong and it shouldn’t just be shrugged off.”

She said that while concrete action, such as the K to 12 program, was important, “it shouldn’t be an added burden to Filipino families.”

The K to 12 program added two years to the basic education curriculum and will be fully in place next school year.

Luistro’s statements came after he urged the over 4,400 UP graduates to become “living heroes for the country,” who would offer up themselves to help revitalize the Philippines.

Apart from being the first June graduates of the university, Class 2015 also has among its members the graduate with the highest weighted general average obtained since World War II. Tiffany Grace Uy graduated BS Biology with a near-perfect grade of 1.004.

Luistro commended Uy for her statement that “a grade is just a number,” saying it was this kind of attitude that brought change not just to oneself but also to one’s community.

Luistro also asked who among the graduates were willing to live in the Bangsamoro region even before the basic law was passed to get to know the people, their dreams and aspirations in order to find solutions for lasting peace and progress.

On next year’s elections, all the education secretary would say was, “I am convinced the challenges we are facing now and in the future will be solved only by leaders who are open to listening [to the people] and remain rooted in the communities they are serving.”