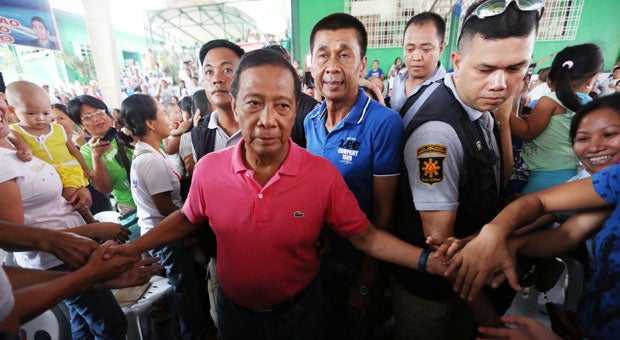 Amid allegations of corruption against him, Vice President Jejomar Binay still saw improvements in his overall performance and trust ratings, results of the latest Pulse Asia survey showed.

In the same survey, President Aquino’s approval and trust ratings recovered early this month after hitting record lows in the previous quarter.

Binay recorded double-digit gains, getting an approval rating of 58 percent in June (up from 46 percent in March) and a trust rating of 57 percent, an increase from 42 percent.

The President got an approval rating of 54 percent, up 16 percentage points from 38 percent in March, while his trust rating rose from 36 percent to 50 percent.

Binay’s daughter, Sen. Nancy Binay, said her family was thanking the people for their continued trust in her father.

“You can expect the Vice President to value your confidence and continue to serve the people,” the senator said in a statement.

The Vice President’s political spokesman, Rico Quicho, said the results of the survey showed that the people appreciated Binay’s hard work and dedication to public service.

“More importantly, it highlights that attacking the Vice President does not make his political opponents prepared for the job of the presidency,” Quicho said.

Pulse Asia said only Aquino and Binay obtained majority approval ratings (54 percent and 58 percent, respectively), while only the Vice President enjoyed the trust of the majority of Filipinos (57 percent) in June.

Presidential Communications Secretary Herminio Coloma said Aquino was “gratified” that the public “recognizes the efforts of his administration to improve the delivery of public services and continue implementing vital reforms so that the fruits of good governance may be sustained and made permanent.”

The increases in Binay’s numbers came despite results from the same survey released last week that showed the Vice President had been overtaken by Sen. Grace Poe as the top choice for President.

Binay is facing allegations that he and his son, Makati Mayor Junjun Binay, were involved in the overpriced construction of the Makati City Hall Building II.

Other controversies include the security and janitorial services at City Hall, the construction of Makati Science High School building, his ownership of various condominium units, his agricultural estate in Batangas province and the deal between the Boy Scouts of the Philippines (BSP) and Alphaland Corp. to develop the BSP’s 1-hectare property in Makati.

The Vice President and his alleged dummies have also been reported to have kept numerous bank accounts that contained huge sums way beyond their legal income.

Earl Parreño, a member of the board of the Institute for Political and Electoral Reform, attributed the gap between the approval and trust ratings, and the presidential preference ratings to the different factors that the respondents considered in answering survey questions. The poll was conducted from May 30 to June 5.

“The survey on approval and trust ratings, and [the one on] the presidential preferences were conducted simultaneously and you can see that there is a difference between the responses,” Parreño said in a phone interview.

“In the more partisan question [presidential preference], they are looking at the candidate’s values and advocacies that they can identify with,” he explained.

“In the approval and trust questions, they are looking at what the public official has done so far in his role in the government,” he added.

It is the respondent’s perception that changes in a short period and depends on the events that happened during the time of the survey, he said.

Parreño cited the case of Mary Jane Veloso, who had been been sentenced to death for drug smuggling in Indonesia but was granted a last-minute reprieve in April.

President Aquino, who also saw his approval and trust ratings improve, attributed the reprieve to concerted efforts of everyone who took up her cause.

The President proposed to the Indonesian government, through its Foreign Minister Retno Marsudi, that it was important to keep Veloso alive as she could be a witness against the drug syndicate that victimized her.

For his part, Binay, Aquino’s adviser on migrant workers’ affairs, met with his Indonesian counterpart in Jakarta and delivered an appeal for mercy for Veloso.

Speaker Feliciano Belmonte posted an approval rating of 30 percent in June, up from 27 percent in March. His trust rating also went up from 23 percent to 28 percent.

Thirty-one percent approved of the work of Chief Justice Maria Lourdes Sereno in the second quarter, a slight improvement from 29 percent in the first quarter. Her trust rating was unchanged at 27 percent.

The performances of the Senate, House of Representatives and Supreme Court were basically unchanged, according to Pulse Asia. Not one of these government institutions received a majority approval rating in June.

The Senate’s overall approval rating was 40 percent in June from 38 percent in March, the House’s at 35 percent from 34 percent and the Supreme Court’s at 44 percent from 45 percent.–With reports from Jerry E. Esplanada and Christine O. Avendaño