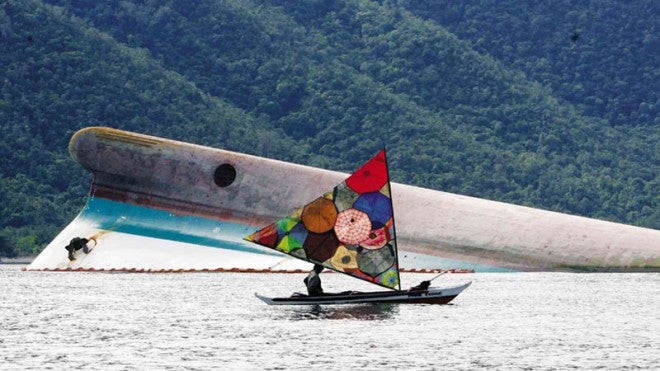 POSEIDON’S WRATH File photo taken on June 25, 2008, shows a small boat with a colorful sail passing by the hull of the Princess of the Stars four days after the Sulpicio Lines vessel capsized in the Sibuyan Sea at the height of Typhoon “Frank.” INQUIRER FILE PHOTO

The struggle for justice for hundreds of victims of the ill-fated MV Princess of the Stars is far from over.

Only 32 survived the sinking, one of the Philippines’ worst sea tragedies. The remains of 300 were later recovered, but another 400 remained missing.

Despite storm warnings, the Philippine Coast Guard gave the vessel, owned by Sulpicio Lines based in Cebu, clearance to depart. Sixteen hours later, the ferry sent a distress message, saying it was experiencing engine trouble off Sibuyan Island.

There, it was engulfed by strong winds and mountainous waves whipped by Typhoon “Frank” (international name: Fengshen), causing water to seep in and tilting the ship heavily to the left.

A total of 135 civil cases have been lodged in courts in Manila and Cebu by families of the victims against Sulpicio Lines, seeking damages worth P1.04 billion for negligence and breach of contract of carriage, according to the Public Attorney’s Office (PAO) chief Persida Acosta.

But no one has been held criminally liable for the disaster.

In July 2009, the Supreme Court affirmed a Court of Appeals decision declaring there was no probable cause to indict Edgar S. Go, Sulpicio’s vice president, for reckless imprudence resulting in multiple homicide.

Marimon, who remains missing to this day, is among the accused in the civil cases.

Acosta, chief legal counsel of the victims’ relatives, said in an e-mail interview that her office had received information that the skipper was still alive.

The parties underwent mediation and conciliation proceedings during the pretrial stage of the civil cases in Manila and Cebu, including judicial dispute resolution wherein the presiding judges to whom the civil cases were initially raffled acted as mediators.

“[Both] failed because the amount offered by Sulpicio was only P10,000 per family, an amount that is highly unconscionable compared [with] the claims for damages of the plaintiffs,” Acosta said.

“The main obstacle for swiftly settling these cases is the defendants’ unwillingness to pay the victims any amount other than what the insurance company paid the victims by virtue of the insurance policy,” she said.

The PAO chief cited Republic Act No. 9295, or the Domestic Shipping Development Act of 2004, which mandates domestic shipping companies to secure insurance for its passengers. The amount is P200,000 in case of death and P20,000 for burial expenses.

Marina canceled the certificate of public convenience of Span Asia’s 11 vessels after the shipping firm failed to comply with the International Safety Management requirements and had poorly implemented safety rules.

Span Asia has not been ferrying people since the middle of 2014, said its port manager, Nestor Ponteres.

What’s in a name?

In February 2010, Sulpicio changed its corporate name to Span Asia which was approved by the Securities and Exchange Commission, according to the company vice president, Harold Go.

Go dismissed suggestions that the move was in anticipation of Span Asia being allowed to resume full operations.

Families of the victims saw the name change as an indication that the respondent and its officers were doing everything to avoid liability.

The change of name does not have any effect on the pending cases, the PAO said.

Sulpicio Lines was no stranger to maritime disasters; four of its vessels sank in the last 30 years.

On Dec. 20, 1987, the MV Doña Paz collided with the oil tanker MT Vector, killing 4,000 people. The collision remains on record as the worst maritime disaster in peacetime.

The MV Doña Marilyn sank in October 1988, claiming 150 lives; the MV Boholana Princess went down in December 1990 but no casualties were reported; and the MV Princess of the Orient sank in September 1998, resulting in the loss of 150 lives.

Victims of sinking ship get P1.38M in damages