Pope pauses in silent prayer before Shroud of Turin 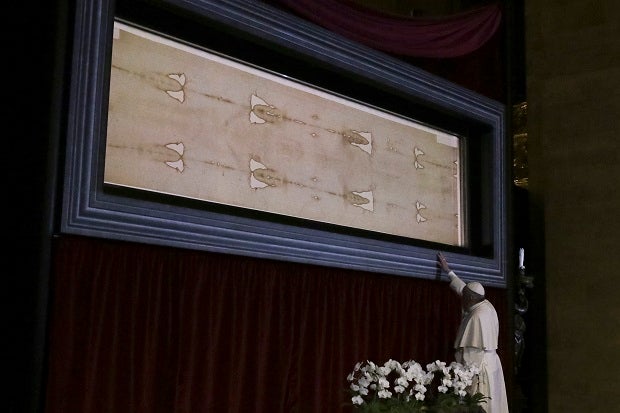 Pope Francis prays in front of the Holy Shroud, the 14 foot-long linen revered by some as the burial cloth of Jesus, on display at the Cathedral of Turin, Italy, Sunday, June 21, 2015. Francis visited the long linen with the faded image of a bearded man, during his two-day pilgrimage to Turin. AP

TURIN, Italy — Pope Francis paused in silent prayer before the Shroud of Turin Sunday, becoming the latest of hundreds of thousands of people who have come this year to Turin’s cathedral to view the burial linen some believe covered the body of Jesus after crucifixion.

Francis sat for several minutes before the shroud, contained in a protective glass case. He lowered his head at times in apparent reflection and occasionally gazed up at the 4.3-meter (14-foot) long cloth. Then he took a few steps, placed his hand on the case, and walked away without comment.

Later, after celebrating Mass of the faithful in a packed Turin square, Francis gave his impression of the cloth as he spoke of the love Jesus had for humanity when being crucified.

“Icon of this love is the Shroud, which, even this time, has attracted so many people here to Turin,” Francis said. “The Shroud draws (people) to the tormented face and body of Jesus and, at the same time, directs (people) toward the face of every suffering and unjustly persecuted person.”

The shroud’s display began April 19 and runs through June 24.

Other pontiffs have made the journey to the northern city during previous displays of the shroud. When John Paul II saw the shroud in 1998, he said the mystery surrounding the cloth forces questions about faith and science and whether it really was Jesus’ burial linen. He urged continuous study. Benedict XVI described the cloth as an icon “written with the blood” of a crucified man.

Skeptics say the cloth bearing the image of a crucified man is a medieval forgery.

Recent studies on the shroud however show that the image on the cloth was likely imprinted by an extremely strong burst of energy—the kind that could not have been produced in the Middle Ages.

For the Shroud of Turin, “you would need voltages of up to tens of millions of volts,” said Giulio Fanti, Professor of Professor of Mechanical and Thermic Measurements at the Department of Mechanical Engineering of the University of Padua.

“Or, you would have to look outside the field of science and see the phenomenon as linked to the resurrection,” added Fanti who published the results of his study in the Journal of Imaging Science and Technology.

Turin, the heartland of Italy’s auto industry, is considered Italy’s blue-collar labor capital, and Francis used his two-day visit to the city to denounce exploitation of workers, singling out women, young people and immigrants as frequent victims.

“Immigration increases competition, but migrants shouldn’t be blamed because they themselves are victims of injustice, of this throw-away economy and of wars,” Francis said in a speech in a square outside the cathedral.

He then made an apparent reference to European countries as well as some northern Italian regions which are refusing or are reluctant to take some of the tens of thousands of migrants who have landed at southern Italian ports after being rescued in the Mediterranean from overcrowded, unseaworthy smugglers’ boats.

“It makes one cry to see the spectacle of these days in which human beings are treated as commercial goods,” Francis said.

Turin is the Piedmont region’s capital, and during Mass, the Argentine-born Francis quoted from a poem in local dialect that praises the qualities of those who emigrated from Piedmont — like some of his own ancestors — to seek work abroad.

“Our ancestors knew well what it meant to be rock-solid,” Francis said. Quoting from the poem, the pope said these emigrants were “proper and sincere, they appear to be what they are.”

In an unscheduled stop, Francis ducked into the church in Turin where his paternal grandparents were married in 1907, and where, in 1908, his father Mario was baptized. The ANSA news agency quoted the Rev. Giustizio Zoppi as saying Francis left a vase of yellow roses on the altar and then asked for a chair so he could sit in silence for a few minutes.

“We didn’t ask him to come, he wanted to,” Zoppi said.

On Monday, before he heads back to Rome, Francis will lunch in Turin with some of his relatives who live in Piedmont.