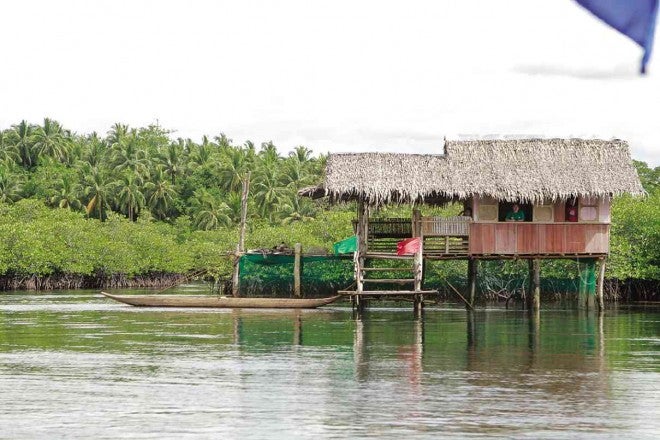 A HOUSE on stilts  is a common sight in Barangay Day-asan, where 1.8-kilogram lobsters are grown right under the kitchen. The community fell victim to the pork barrel scam but has since risen with the help of a US-based nongovernment group. Nowadays, the people of the village are looking forward to a brighter future. photo by MA. CECILIA RODRIGUEZ

With open arms, fisherman Alejo Gratico and his neighbors welcomed two men from a nongovernment organization (NGO) who arrived in Surigao City in 2008. At last, help finally came to the remote fishing community in Sitio Pag-ayawan in Day-asan village, Gratico thought.

“They promised to give us 100 lobster fingerlings. That would fetch some P25,000. They said it was a grant from the BFAR (Bureau of Fisheries and Aquatic Resources). All we had to do was to sign documents,” Gratico recalled.

Filled with hope, everyone waited. Most excited was Gratico, who was counting on the extra cash he would get to send his eldest child to college. But they never heard from the NGO again until after five years, when news broke out about dummy NGOs identified with wheeler-dealer Janet Lim-Napoles, the alleged mastermind of the pork barrel scam.

The NGOs tricked unwitting farmers and fisherfolk into being listed as beneficiaries of millions of funds from the Priority Development Assistance Fund (PDAF).

“We were very disheartened. It was very difficult to trust any NGO or even any government agency after that,” Gratico said in the dialect.

But in July 2014, help came again for the Day-asan residents. This time, it was for real.

Day-asan Councilor Nenita Batulan said the Philippine Cold Chain Project (PCCP) had been a saving grace for families in the village.

The PCCP is part of an agricultural assistance package from the US Department of Agriculture and implemented by US-based Winrock International. It is focused on driving self-sufficient and safe food production and processing in the Caraga region.

In Day-asan, people literally live above water as houses are built on reclaimed sandbars developed into little communities just off Surigao Bay. 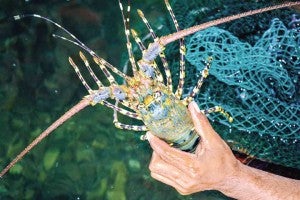 For tourists, it is the “Floating Village” and Surigao’s “Little Venice.” For enterprising low-income families, it is an ideal place to grow lobsters. In fact, many homeowners raise lobsters right under their kitchens.

“We were always on the losing end when it came to pricing. It was the big lobster traders who dictated the price,” Batulan said.

To access assistance from the PCCP, the Barangay Day-asan Lobster Culture Association was organized by the residents. Gratico was elected chair.

Still traumatized by their experience in 2008, many households initially refused to join the association. But Gratico was adamant and put his faith on the project, having seen the commitment of community coordinators who were assigned by Winrock to help them.

Soon after, 30 households signed up for the project, enough for them to access the PCCP funds through the First Community Cooperative microcredit facility, and start the home-based lobster-growing business in the village.

In August 2014, the association was formally formed, but it took months for it to be registered with the Securities and Exchange Commission. In May this year, the lobster fingerlings were released to the members.

“Under this financing mechanism, we loaned out 300 battery-sized fingerlings worth P75,000 to P90,000, payable in 12 months at a very low interest of 0.8 percent. Recipients do not get cash, just the fingerlings,” said Jim Orprecio, PCCP deputy chief of party.

Orprecio said his agency wanted to develop a sense of ownership among the residents and do away with the usual dole system of giving grants to communities.

“Experience shows that if we just give everything to beneficiaries without any equity or counterpart from them, sustainability becomes a problem. You don’t always take care of what you feel is not yours,” he explained.

For Batulan, the PCCP saved them from loan sharks and opportunist investors who used to finance their lobster culture business at very high interest rates.

“We usually ended up with just a break-even or even at a deficit because of the high interest imposed on us by financiers. If we sell off-season, traders buy our lobsters at a very low price,” she lamented.

“When we received the fingerlings, we were in disbelief. I was asking myself, ‘Is this true? Are we not being tricked this time?’” Gratico said, his voice cracking.

He noted how life took a turn for the better for them since the project had come.

“The community is now more cohesive. We talk about the future. We talk about our business. Before, as soon as we get the day’s catch from the sea, we just laze around, do nothing else. 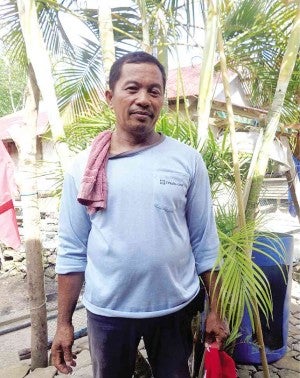 Now, we take care of our little lobsters, hopeful for the extra cash we’ll get from them by the end of the year,” he said.

He outlined his plans for the association and let out a faint laugh when asked if the others who remained doubtful of the project would have a change of heart soon.

“I can just imagine when they see us selling our own lobsters at P2,500 a kilo, they’ll rush in to sign up,” he quipped.

At 80- to 90-percent survival rate, the 300 lobster fingerlings given by the PCCP would be equivalent to over half a million in revenue. The first harvest of fully grown lobsters is expected in December.

Association members have agreed to continue investing part of their earnings into their small lobster-growing business. The rest of the money will be used for their children’s education and to pay off debts.

Gratico is optimistic that the project will improve the quality of life in Day-asan.

Orprecio said that apart from providing a sustainable source of income for fisherfolk, the long-term impact of the project was increasing the production and providing a steady supply of quality aquaculture products, such as lobsters, to the local and export markets.