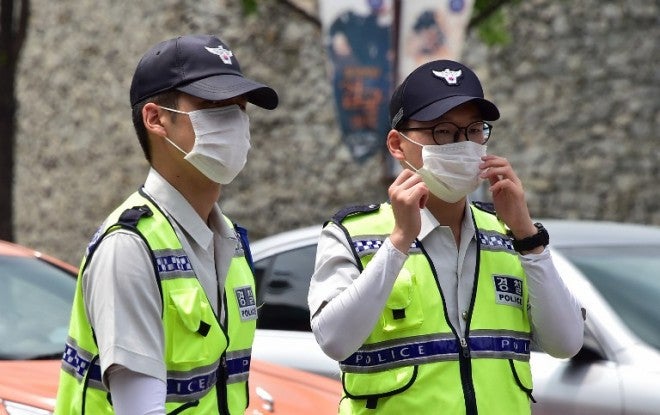 South Korean policemen wearing face masks walk on a street in downtown Seoul on June 19. South Korea has said that the MERS outbreak that has killed 24 people appears to have begun subsiding, as it reported one new case—the lowest rate of new infections in two weeks. AFP

SEOUL, South Korea—South Korea said on Friday that the MERS outbreak that has killed 24 people appears to have begun subsiding, as it reported one new case—the lowest rate of new infections in two weeks.

This brought to 166 the total number of confirmed cases of the disease in the country since the first was confirmed on May 20, the health ministry said.

The number of people in quarantine had fallen 12 percent from Thursday to 5,930, a day after Thailand reported Southeast Asia’s first case of the deadly virus since the South Korean outbreak.

The government of President Park Geun-Hye has come under attack for its inadequate initial response but World Health Organization (WHO) chief Margaret Chan expressed guarded optimism Thursday over South Korea’s ability to contain the outbreak.

She said Seoul was now “on a very good footing” after an initially slow response.

A rural village, which had been sealed off for quarantine, was opened up Friday, allowing its population of 102 people to resume normal activities.

“Apparently, the outbreak has started subsiding,” a health ministry official in Seoul said.

“But we have to wait and see whether more cases occur” in hospitals exposed to the virus, he added.

The latest case involved a 62-year-old man who contracted the virus while giving nursing care to an infected family member at Samsung Medical Centre in Seoul, the largest epicenter of the outbreak linked to about half of all confirmed cases.

The hospital suspended services to non-MERS sufferers on Sunday, with other patients being moved to different medical facilities, and would remain closed for other treatment at least until Wednesday next week.

Currently, 112 patients are in hospital, while 30 people who have recovered have been released.

Jangdeok Village in Sunchang County south of Seoul was back to normal after road blocks were lifted Friday, two weeks after a 72-year-old resident there was diagnosed with the virus.

“This is good. I felt like I had been a prisoner for a long time,” Park Yoo-Hyun, a 72-year-old farmer, was quoted as saying by Yonhap news agency.

A second village under quarantine is expected to follow suit on Monday, barring any new cases there.

On Tuesday a senior health official expressed cautious optimism that the worst of the outbreak was over, only for eight new cases to emerge the following day when the WHO warned that South Korea was facing a “wake-up call” and urged more vigilance.

But WHO chief Chan said on Thursday that the outbreak would be brought under control “although it may take a little longer than everyone would like to see.”

The good news was that scientists had not detected any genetic change in the virus, she added.

However, the government’s laggardly initial response to the disease has fueled public discontent that began in April last year when the Sewol ferry disaster claimed more than 300 lives, mostly high school students.

Park’s approval ratings have fallen further over the past week to 29 percent, the lowest since she took office in 2013.

In Bangkok, Thai authorities said two relatives of a 75-year-old Omani man found to have MERS were being tested for the virus.

Thailand, a booming medical tourism hub popular with Middle Eastern patients, confirmed the man had MERS on Thursday, days after he arrived in Bangkok for treatment for a heart condition.

Thai authorities are monitoring 85 other people who have been in contact with the Omani, including those on board his flight to Bangkok, at hospital or in their homes, a health ministry spokesperson told AFP.

At a later press conference Mondej Sookpranee, an infectious diseases doctor at Bumrungrad Hospital where the Omani man was first admitted, said it had placed 58 of its staff in quarantine but no new MERS cases had been detected.