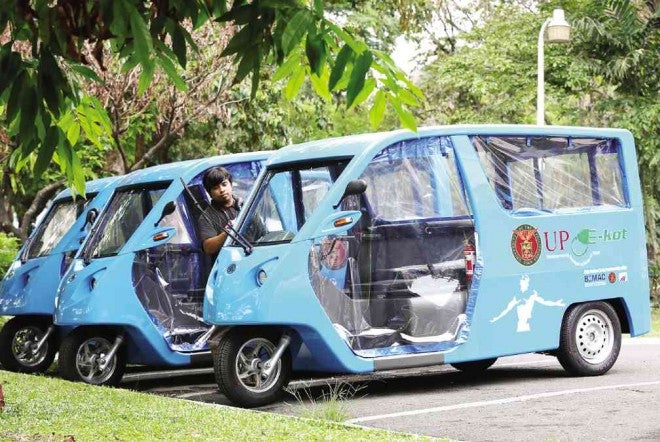 Move over, UP Ikot jeepneys. The UP “e-kot” or electric tricycle is coming.

Ten e-kot tricycles will soon be seen on the University of the Philippines campus in Diliman, Quezon City, for a two-month trial run as part of a study on environment-friendly modes of transportation.

“The vision of UP Diliman is to go green in the next five years. This will be a test of its feasibility,” said Nestor Castro, UP vice chancellor for community affairs, whose office is overseeing the test run. “We will look at power consumption, speed, maintenance [and] whether it can handle the terrain and the volume of passengers, among other things.”

A memorandum of agreement will be signed between UP Diliman Chancellor Michael Tan and Bemac president Takahiro Innami during the e-kot launch Friday.

The study will be done in coordination with the UP National Center for Transportation Studies. After an assessment, they will recommend whether to discontinue the e-kot project or request a grant from the Japan International Cooperation Agency for the purchase of more e-vehicles, Castro told the Inquirer on Thursday.

Bemac’s 68VM e-trike currently costs P450,000. The model can accommodate six passengers and go up to 50 kph, with a 60-km range on a fully charged lithium ion battery.

The tricycles will provide free services on UP campus from June 20 to Aug. 19, mainly on streets not covered by existing jeepney routes, Castro said.

Some units will be deployed for messengerial tasks between Quezon Hall and other buildings, others for the UP Diliman police, maintenance office and the dormitories. They may also be used by varsity players or employees who need late-night rides.