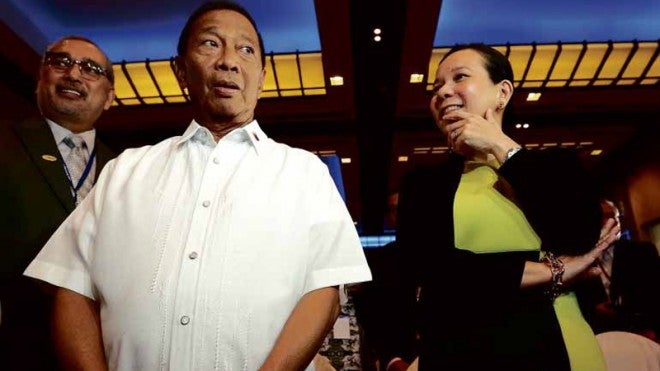 “A wake-up call” was how Vice President Jejomar Binay described his fall to second place in the latest survey of voters’ preferred presidential candidate that saw Sen. Grace Poe being catapulted to first place.

Reacting to the survey results, Poe said she valued the people’s sentiments. “The voice of the people is important to me,” she said.

She thanked the public for its continued belief in her. “Again, I am humbly expressing my thanks for the people’s trust in me,” she said.

Poe said she shared the people’s hope for a better country. “I join them in aspiring for a country where each and every Filipino would be able to have the opportunity and chance to grow,” she said.

Binay on Thursday told reporters he did not know what caused his tumble.

“As I have said, my rule in campaigning is always be running scared. Never be overconfident since I have undergone such an experience before when Mar Roxas’ edge over me was 52 percent to 2 percent,” he said, referring to the survey ratings when he and Roxas were contending for the vice presidency in 2010.

But he said his tumble would prompt him to work even harder to regain the people’s support.

Poe overtook Binay as the top preferred presidential candidate on Pulse Asia’s survey from May 30 to June 5, which showed Poe having a preference rating of 30 percent to Binay’s 22 percent.

How he would regain the people’s support was a “secret,” Binay said. He believed he could get results if he would speak directly to the people on the streets.

Interior Secretary Mar Roxas said he was “touched” by the 150-percent jump (from 4 percent in March to 10 percent in June) in his rating in the latest Pulse Asia survey for presidential candidates.

But more than his positive showing in the voters’ preference for President Aquino’s would-be successor, Roxas said the new poll was proof that the majority of Filipinos wanted the President’s “daang matuwid” (straight path) advocacy to proceed.

“The results are clear. Daang matuwid is the real front-runner in the 2016 race… The voters want ‘daang matuwid’ (straight path) to continue,” he said in a text message to the Inquirer.

Roxas, widely perceived to be the President’s choice to succeed him, also seemed unfazed by the sudden rise in Poe’s popularity.

“Personally, I’m touched and I sincerely thank our countrymen for the 150-percent increase in the trust they have given me,” he said.

Roxas said the “trajectory” of his standing in the voter’s preference survey was “in the right direction, just right one year before (the) elections.”

“I am confident that (the) 2016 (elections) will be more about leadership values of proven honesty, a track record of performance and good governance rather than popularity and personalities,” he said.

Manila Mayor Joseph Estrada, who ranked fifth, tied with Roxas, said he was “99 percent sure” of running for reelection as Manila mayor.

Despite being nearly sure of running as mayor, Estrada said he was leaving room for changes on the political scene. “Anything can still happen between now and the start of the election period. Being President is providential. Bahala na. But as of now I’m still very much devoted to my job here as the mayor,” he said.

“A confluence of events” may have led to the surge in Poe’s ratings, but some analysts say that the senator has to consider more than just numbers in deciding whether to run for higher office.

Edmund Tayao, a political science professor at the University of Santo Tomas, attributed the increase in Poe’s rating to a confluence of events, including the ongoing investigation of the alleged corrupt practices of Binay and his refusal to answer the allegations.

Another incident that may have worked in favor of Poe was the attack by Binay’s camp against her, Tayao added.

“It backfired and resulted in support for her because the public saw her as an underdog,” Tayao said.

Asked about the increase in Poe’s numbers, Lim said the senator was very popular because people perceived her as trustworthy.

Asked about the impact of the survey results on Binay’s chances of winning the presidency, Lim said Binay would not be a sure winner.

“He might have a fight but he might even lose. Of course, it is too early to say. There might be other candidates and issues in the future. But my opinion is that Poe will win,” he said.

The secretary general of the ruling Liberal Party (LP) chose to view the glass as half-full with regard to Roxas.

Western Samar Rep. Mel Senen Sarmiento noted that Roxas made the “highest growth rate” from 4 percent in the first quarter to 10 percent in the second.

“At this point, Secretary Roxas has not even declared any confirmation about 2016,” he said.

“But we expect things to continue taking off because the administration really has a good track record of delivering on its programs. Even the international community readily recognizes the strides made in the economy and the gains of the country,” Sarmiento said.–Reports from Christine O. Avendaño, Leila B. Salaverria, Marlon Ramos, Nathaniel R. Melican, DJ Yap and Gil Cabacungan; and Almi Atienza, Ana Roa and Kate Pedroso, Inquirer Research