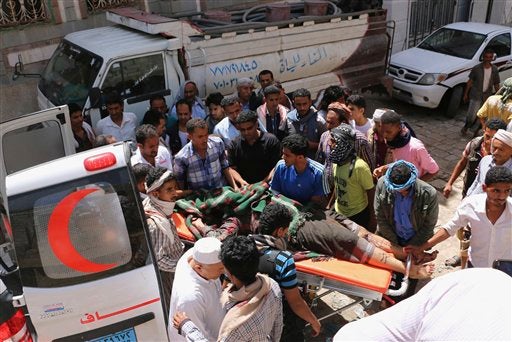 People carry the body of a man who was killed during clashes between tribal fighters loyal to the exiled President Abed Rabbo Mansour Hadi and Shiite rebels known as Houthis in the western city of Taiz, Yemen, Sunday,. AP

SANAA, Yemen — Health officials and international organizations say thousands of people have been diagnosed with dengue fever in southern Yemen, where fighting has raged for months between Shiite rebels and their opponents.

The top health ministry official in the southern port city of Aden, al-Khadr Al-Aswar, said Thursday that at least 5,000 people have been diagnosed with the mosquito-borne virus. He says mountains of uncollected garbage, sewage and heat have contributed to the spread of the disease.

The World Health Organization said last week that at least 3,000 cases were reported since March in several provinces, including Aden.

A Saudi-led coalition backed by the United States launched an air campaign in late March against the Iran-supported rebels, known as Houthis, who captured Yemen’s capital last year.