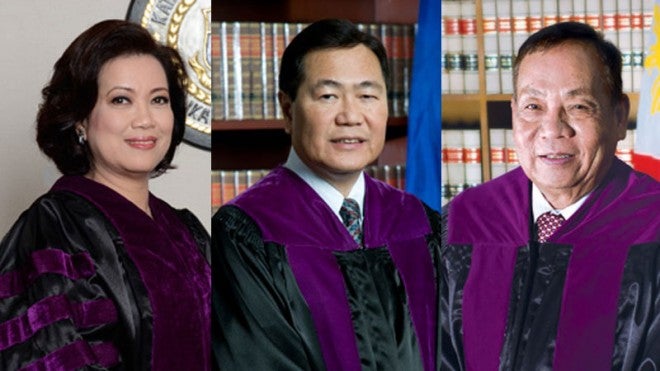 Chief Justice Maria Lourdes Sereno and Associate Justices Antonio Carpio and Martin Villarama Jr. (from left) on Tuesday threw out Makati Mayor Junjun Binay’s bid to remove them from the panel of magistrates that would decide the case that the Office of Ombudsman had filed in the high court to uphold his suspension. sc.judiciary.gov.ph

Three Supreme Court justices are standing their ground amid allegations that they are biased against Makati Mayor Jejomar Erwin “Junjun” Binay Jr. whom the Ombudsman wants suspended while being investigated in connection with the allegedly overpriced Makati City Hall Building II.

Chief Justice Maria Lourdes Sereno and Associate Justices Antonio Carpio and Martin Villarama Jr. on Tuesday threw out Binay’s bid to remove them from the panel of magistrates that would decide the case that the Office of Ombudsman had filed in the high court to uphold his suspension.

“The individual justices concerned have indicated that they are not voluntarily inhibiting from the proceedings; the motion to inhibit is denied,” court spokesman Theodore Te said in a press briefing Tuesday afternoon.

Asked whether the rejection also meant a denial of Binay’s claim of bias against them, Te said: “They did not say. The only statement given was that they have denied the motion to inhibit.”

“It’s a motion for voluntary inhibition. It’s up to them. Since they decided not to inhibit, that’s it,” he said.

Before the high court is Ombudsman Conchita Carpio Morales’ petition to stop the Court of Appeals’ (CA) proceedings on Binay’s plea to stop his six-month preventive suspension.

The Ombudsman has ordered Binay’s suspension pending investigation of the mayor’s alleged involvement in the purportedly overpriced contract to build the P2.3-billion parking building.

The CA issued a writ of preliminary injunction in Binay’s favor on April 6, indefinitely extending a 60-day temporary restraining order it earlier ordered.

In a motion filed in the first week of June, Binay sought the inhibition of the three justices, citing incidents and situations that he believed deemed them disqualified from handling the case where he was a respondent.

The Binay camp alleged that Sereno had “preconceived bias” against the condonation doctrine, the subject of the Chief Justice’s tense exchange with the mayor’s counsel, Sandra Coronel, in oral arguments on the case at the court’s summer session in Baguio City on April 22.

Dressing down Coronel in the final hour of the second round of oral arguments on the case, Sereno expressed her vehement objection to the doctrine that acquits a public official from administrative liability by virtue of reelection.

The Binay camp is invoking this doctrine in questioning the Ombudsman’s power to suspend him pending an administrative investigation.

During her hourlong interpellation, Sereno said the “unfortunate doctrine” was “wrong, that it would wreak havoc on the constitutional framework” and that it would put in peril the quality of governance that future generations of Filipinos would have.

In his motion, Binay said the Chief Justice had “manifested bias, prejudice and partiality” against his case,” and has “made statements signifying intolerance, antagonism and abhorrence of the respondent.”

In seeking Carpio’s inhibition, Binay cited the magistrate’s family ties with the petitioner, Ombudsman Morales, who is his first cousin.

“Clearly, they are relatives within the sixth degree of affinity, for which reason the recusal of Justice Carpio from the instant case is not only warranted, but expressly mandated by the Rules of Court,” Binay’s motion read.

The mayor sought Villarama’s recusal for supposedly being in touch with lawyers from the Ombudsman’s office, citing the justice’s statement during oral arguments.

With the three magistrates’ decision to participate in the case, 11 justices continue to handle the Ombudsman’s case against Binay.

Four justices earlier volunteered to inhibit themselves from the case. The first was Associate Justice Diosdado Peralta, who decided to keep his hands off the case as his sister, Visha Peralta-Aldon, is a department head at Makati City Hall.

The three other justices later recused themselves after participating in the first round of oral arguments.

Associate Justice Presbitero Velasco Jr. decided to recuse himself amid allegations that he had inhibited himself from a case involving Binay’s mother, former Makati Mayor Elenita Binay. He, however, maintained that his earlier recusation was not because of Binay but of another party to the case, and that he had never met Binay.

Associate Justice Arturo Brion volunteered to inhibit himself as his wife was a confidential lawyer in the chamber of one of the appellate court justices handling Binay’s case and thus a respondent in the Ombudsman’s case in the Supreme Court.

Associate Justice Francis Jardeleza also recused himself as “his previous participation as Solicitor General in a pending case before the court may affect his participation in the current case.”

The high court has required the Ombudsman and the Binay camp to comment on each other’s memoranda on the case within 10 days of receiving Tuesday’s resolution.