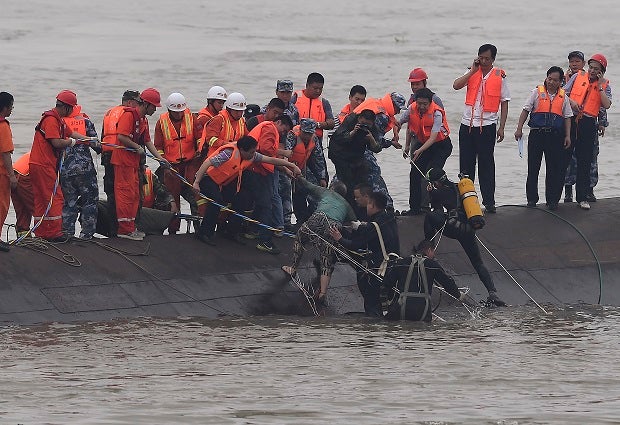 In this photo released by China’s Xinhua News Agency, rescuers save a survivor, center, from the overturned passenger ship in the Jianli section of the Yangtze River in central China’s Hubei Province Tuesday, June 2, 2015. Rescuers pulled several survivors to safety after hearing cries for help Tuesday from inside a capsized cruise ship that went down overnight in a storm on China’s Yangtze River, state broadcaster CCTV said. AP

BEIJING, China – The death toll from a cruise ship which sank on China’s Yangtze river was confirmed as 442 on Saturday, state media reported, as the final bodies were found from Communist China’s worst shipping disaster.

Only 12 people survived when the “Eastern Star” cruise ship capsized during a storm on June 1, Tang Guanjun, the director of the river’s navigation authority, was quoted as saying by Xinhua news agency.

A total of 454 people, mainly tourists in their 60s, were on the ship when it sank in Jianli in China’s central Hubei province in what witnesses said was a matter of seconds. Weather officials said a freak tornado hit the area at the time.

Tang said earlier reports that 14 people had survived out of 456 had been revised after “further check-ups and verifications”, Xinhua reported.

The final toll comes after search and rescue personnel last week held a solemn ceremony for the dead after distraught relatives from across China gathered near the disaster site.

Information about the sinking, and media access to the site and to relatives of passengers, has been tightly controlled and online criticism of the search quickly deleted.

Teams scoured the sunken ship for days, going room to room underwater before finally lifting the body of the vessel from the water using vast cranes, but poor weather and visibility hampered rescue efforts.

The search scope was also extended to 1,300 kilometers (800 miles) of the Yangtze, Asia’s longest river, in the hope of finding those still unaccounted for.

Search and rescue operations have now been ended but an investigation into the sinking is still underway, Tang was quoted as saying by Xinhua.

A petition posted by family members on the social media service WeChat has called for the death penalty for the ship’s captain — one of the few survivors of the disaster — who is in police custody.

The sinking was China’s worst shipping disaster since the Communist Party came to power in 1949. In 1948 up to 4,000 on board the SS Kiangya were killed when it sank near Shanghai.

The vessel was cited for safety infractions two years ago, and state broadcaster CCTV had said investigators would probe its structure for any flaws.

In operation for nearly 20 years, the ship had undergone an annual maintenance late last year and was fit to cruise until April 2016, Xinhua said.