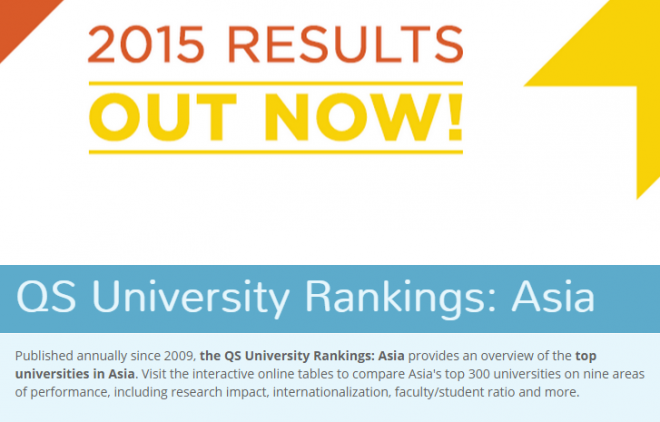 THE “big four” schools in the country made it yet again to the top 200 universities in Asia, the 2015 Quacquarelli-Symonds (QS) Rankings for Asia revealed on Wednesday.

The University of the Philippines, the Philippines’ national university, remains to be the only school included in the top 100. However, its ranking dropped from 63rd in 2014 to 70th this year.

Ateneo de Manila University improved its rank, climbing a notch from 115th in 2014 to 114th this year.

Meanwhile, De La Salle University and University of Santo Tomas both slipped from their previous rankings: DLSU dropping to 181-190 bracket from last year’s 151-160 and UST sliding two places from 141st in 2014 to 143rd this year.

While incurring a slight drop, UST earned the distinction of being the only Philippine university to be awarded four QS stars.

According to QS, a four-star university “is highly international,” demonstrates excellent research and training and provides an “excellent environment” for students and teachers.

For 2015, the National University of Singapore grabbed the top spot in the QS Asian Rankings, followed by University of Hong Kong and Korea Advanced Institute for Science and Technology.  Hong Kong dominated the top 10 with four schools included in the bracket.

QS has been publishing the rankings of Asian universities annually since 2009.