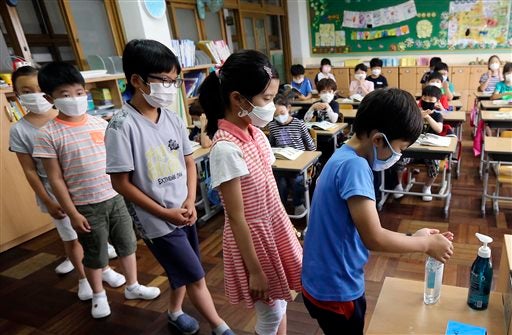 South Korean elementary school students wear masks as a precaution against the MERS, Middle East Respiratory Syndrome, virus as they sanitize their hands to protect against possible MERS virus at an elementary school in Busan, South Korea, Tuesday, June 9, 2015. South Korea is determined to end this week the outbreak of Middle East Respiratory Syndrome, saying upcoming several days will be a critical moment on whether to overcome the medical crisis.(Cha Geun-ho/Yonhap via AP)

Korea’s ongoing Mers (Middle East Respiratory Syndrome) outbreak is casting a pall over the country’s arts and culture scene, with festivals, concerts and other crowd-drawing events getting postponed or canceled.

The 2015 Seoul International Book Fair, the largest of its kind in Korea which was slated to open next week, announced Tuesday its postponement to mid-October as public fear heightens over the potentially deadly virus.

“We decided to hold the fair at a later late and under better circumstances,” said Koh Young-soo, chairman of Korea Publishers’ Association, the book fair’s organizer.

The book fair is one of many concerts, festivals or big cultural events marred by the Mers scare.

The Mountain Berry and Watermelon Festival, the biggest agricultural event in Gochang County, and the Shinan region’s symbolic Pomfret Festival, announced their cancellation on Monday and Tuesday, respectively.

The Busan Cinema Center has decided to cancel all of its performances for the month of June, while Yongin Cultural Foundation and Jeju’s Seogwipo Arts center also announced cancellations of various performances.

The Mers outbreak is affecting the film industry as well, with locals choosing to stay home rather than risk infection in crowded theaters.

The widespread fear has led film distributors to change their promotional and release schedules as well. Distributor NEW announced that it would be postponing releasing the film “Northern Limit Line” from June 10 to June 24, citing “recent social events and national sentiment” in an official statement. A promotional showcase for upcoming film “Intimate Enemies,” distributed by 20th Century Fox, was canceled with a statement saying, “We hope that there will be no further damage caused by Mers.” Upcoming film “Assassination” starring Jeon Ji-hyun also canceled its press conference, citing “recent events” in a statement.

Mass cancellations have occurred whenever Korea faced an outbreak or a major disaster in the past years.

“From the 2003 (severe acute respiratory syndrome), the (2009 swine) flu to last year’s Sewol ferry disaster, the same situation has been repeated in almost like a cyclic fashion. Even major agencies and event organizers take a severe blow when an event gets canceled,” culture critic Kim Sung-soo said on radio.