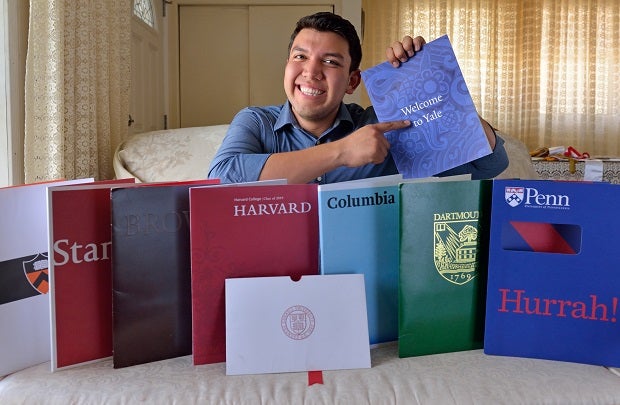 In this June 1, 2015 photo, Fernando Rojas, 17, a Fullerton High School graduate, poses for a photo in Fullerton, California, with literature from the eight Ivy League universities he was accepted into. He decided to attend Yale. AP

FULLERTON, California, United States — It would have been a success story if Fullerton High School senior Fernando Rojas, the son of Mexican immigrants whose schooling stopped in the eighth grade, was accepted to college. But the 17-year-old achieved a surprising clean sweep — he was accepted to every elite Ivy League school.

“I didn’t think I would get into any,” Rojas told The Orange County Register on Saturday. “When I got all eight, it was a blessing and a curse because I had to choose. I was excited and scared and everything at the same time.”

Every Ivy League school told the senior they wanted him.

Rojas also was accepted by Stanford University and two nearby schools, the University of California, Irvine, and California State University, Fullerton.

He is one of four children of Raul Rojas, 59, and wife, Maria, 56, who moved to Fullerton from Jalisco, Mexico, in the early 1980s. Raul is a machine operator, and Maria is a seamstress.

A national speech and debate champion, Rojas reasoned that if he applied to the eight Ivy League schools, he might get into one. 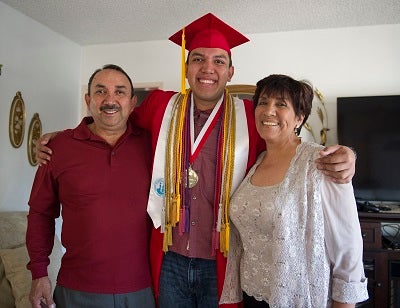 In this May 28, 2015 photo, Fernando Rojas, a senior at Fullerton High School, stands with his parents, Raul Rojas and Maria in Fullerton, California. Rojas, the son of Mexican immigrants, was accepted into all eight Ivy League schools. AP

Sal Tinajero, Rojas’ speech and debate coach at Fullerton, told the newspaper that Rojas is a tenacious self-starter who thrives on competition. “His biggest motivation was his parents to know that their hard work meant something,” Tinajero said.

After visiting several campuses, he settled on Yale, which costs $64,000 a year with room and board. He is responsible for $6,000; Yale scholarships and federal grant money cover the rest.

“I loved Princeton,” Rojas said. “It was a beautiful campus, but it felt very stressful. Stanford was too big and overwhelming.”

“The (incoming) Yale kids were a little bit more enthused to get started and get going,” Rojas added.

With Fernando Rojas translating, his mother said she didn’t initially realize the magnitude of her son’s accomplishment. But once the media outlets started calling, she knew it was a big deal.

Rojas attributes his academic success to hard work and the guidance of his older siblings. “I went into high school knowing what I was supposed to do,” he said.

He’ll mostly take it easy during the summer before heading to Yale in late August. He’s considering majoring in Latin American studies and perhaps a career as a lawyer or in international affairs.

Free time is mostly hanging out with cousins, having movie nights and sleepovers. “Nothing too crazy,” he said.