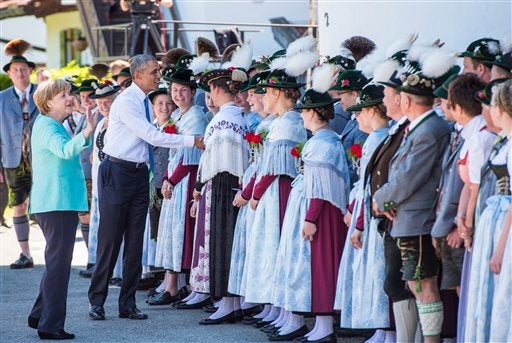 German Chancellor Angela Merkel, left, and US President Barack Obama are welcomed by local residents in their traditional costumes during their visit in the village of Kruen, southern Germany, Sunday, June 7, 2015, prior to the G-7 summit in Schloss Elmau hotel near Garmisch-Partenkirchen. MARC MUELLER/POOL PHOTO VIA AP

As fighting in Ukraine flares and Russian President Vladimir Putin seeks to exploit any cracks in the united Western front on sanctions, Merkel gave Obama a homely reception heavy on symbolism.

Before the other Group of Seven leaders got down to business at a summit at the luxury Elmau Castle resort nestled in the German Alps, close allies Merkel and Obama visited the idyllic nearby village of Kruen.

Locals dressed in their finest traditional “Tracht”—lederhosen (leather trousers) for the men, dirndl smocks for the women, and girls in dresses with their hair in neat plaits.

Obama greeted Merkel, who was wearing a robin’s egg blue blazer, with two kisses on her cheeks and offered her husband, reclusive chemist Joachim Sauer, a handshake and a firm pat on the shoulder.

The two leaders signed the guestbook of Kruen, whose history stretches back to the 13th century, before taking the podium for remarks underlying their shared values.

Obama said G7 leaders must remain united to stand “up to Russian aggression in Ukraine.”

Merkel described the United States as a “friend and essential partner” of Germany despite occasional “differences of opinion”—a reference to an NSA spying scandal that has strained relations over the past two years.

The two kept the tone light, however, with Obama joking that he “forgot to bring my lederhosen” before promising to shop for a pair in town, and praising the “best alphorn performance I have ever heard,” referring to a large Alpine instrument.

Later they tucked into plates of white sausage and soft pretzels, washed down with local wheat beer.

“There’s never a bad day for a beer and a Weisswurst,” Obama quipped on his fourth official visit to Germany, after calling out the Bavarian greeting “Gruess Gott!”

A farmer who sat at their table, 45-year-old Alois Kramer, told AFP the brew had been non-alcoholic.

“He was warm and friendly and down-to-earth,” said Kramer.

“He wants to come back with his family when he doesn’t have to work so much.”

Asked later if the US leader had in fact opted out of the strong local ale at the gathering, White House spokesman Josh Earnest said: “I would be very, very surprised if he ordered a non-alcoholic beer even after an overnight flight on a Sunday morning.”

A source said Merkel had gone for the alcohol-free variety.

As the sun beat down, Obama removed his dark suit jacket as he shook hands and chatted with locals, who snapped photos with their mobile phones.

Marianne, 81, wearing a white blouse and a red shawl with fringe, said she was “delighted” about the visit and had been waiting outside since the early morning hours to catch a glimpse of the two leaders.

“You don’t see something like this every day,” she said with a broad smile.

Bernhard Neuer wore the traditional Bavarian hat with a tuft at the crown made of animal hair.

“Normally we wear our weapons—sabres and Karabiner rifles without ammunition—but of course we couldn’t bring those today,” he said.

Men in dark suits and sunglasses who were wearing earpieces shared the shade of large trees along the main square.

Merkel’s spokesman Steffen Seibert said earlier that she was grateful to the village for agreeing to host her prominent guests.

“We want to give something back to the people here, we want to say thank you—they have a certain burden to bear from the summit,” he said.

More than 22,000 police have mobilized to protect the summit and keep anti-G7 protesters at bay, with dozens of helicopters carrying meeting participants buzzing overhead since the early morning hours.–Ellen Hasenkamp