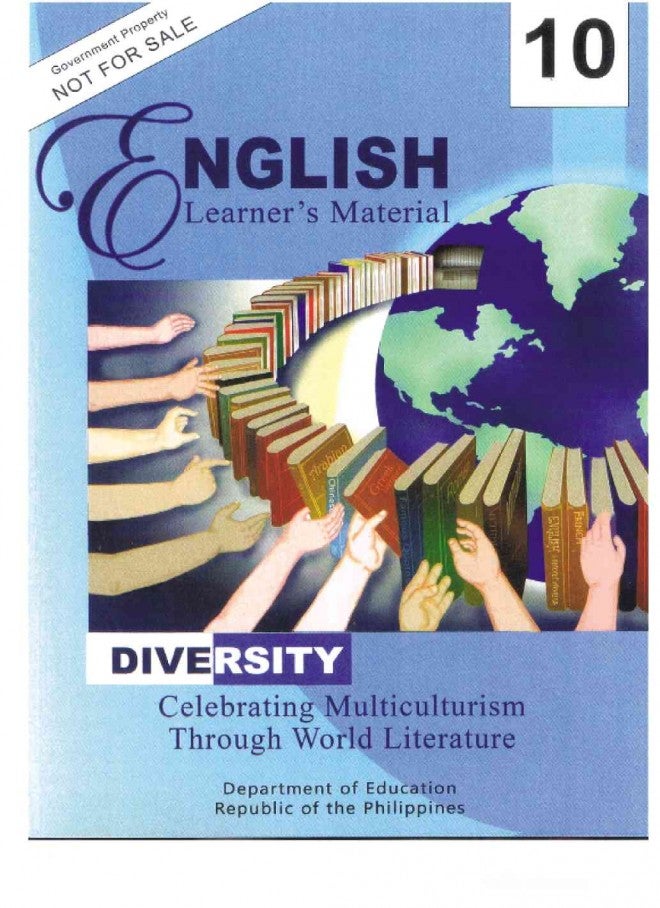 COVER of the controversial textbook reviewed by Antonio Calipjo Go

A self-styled “sick books crusader” has slammed the Department of Education (DepEd) for its failure over the past two decades to catch errors in textbooks and teaching materials used in public schools.

Education Secretary Armin Luistro, in an interview with the Inquirer last week, said, “With that title, I am sure that’s the first draft.”

Luistro said the book that Go had critiqued was still in the printing process, and it had been corrected and given a new title, “Celebrating Diversity Through World Literature.”

He added that if Go truly wanted to help, he should have sent the mistakes he had uncovered in the textbook to the DepEd.

Go said in his letter that the book he reviewed was a 508-page textbook that was “recently published” by the DepEd.

The LRMDS is the DepEd’s online portal where digitized copies of learner’s modules can be downloaded. The Inquirer asked the DepEd for a hard copy of the textbook but had yet to receive it as of writing.

Over the past 20 years, Go has called the attention of the DepEd to various errors he had found in its textbooks, spending his own money to buy newspaper advertising space to publicize the mistakes.

His efforts have raised concern here and abroad about the quality of education in the Philippines and its textbooks “lost in translation.”

Go’s crusade has earned him derision and engulfed him in court litigation by publishers and authors with a string of PhDs after their names.

The college dropout through the years also has appeared in congressional hearings, detailing “glaring errors” that had ostensibly eluded scrutiny of the Instructional Materials Council Secretariat (IMCS), as well as other education officials.

In 2011, he was asked by Luistro to help the DepEd ensure that its textbooks be as error-free as possible. Luistro, however, declined to say why the working relationship with Go didn’t last long.

The La Salle brother recalled that early on as education secretary, he told his colleagues that “if it’s a legitimate error, I would be happy to actually get it and correct it.”

Part of the measures put in place by the DepEd to avoid textbook errors, which Luistro described then as publishers’ errors, was getting its own authors, making all learner modules owned by the department.

“We pay copyright via Filcols (Filipinas Copyright Licensing Society Inc.) [for the] selections that are put there. The problem before was that everything was bid out…. It was a [disorganized] process. It took two to three years for you to choose because there were 25 [publishers] submitting for one textbook,” he said.

By developing its own modules, since it is not allowed to produce its own textbooks, the department is no longer at the beck and call of publishers, Luistro said.

And because the materials are modularized, if changes have to be made for example in one of the 40 modules, it would affect only that particular module since “each module stands on its own,” he said.

Since the modules are also digitized, he added, they “can do an erratum as you see it.”

“As teachers use it, they may spot [an error]. We want the field to participate in the [process]. With the idea that as the years pass by, you keep on developing the material, so it becomes perfect. Not just from a point of view of a writer but actually [as a material] used in the field,” Luistro said.

The education secretary stressed that having digitized versions of the modules was not a way to cover errors.

“Textbooks, even though they are error-free, have to be updated every so often,” Luistro said, adding that “I don’t think we have a textbook that has no error, even typographical.”

The DepEd has “a loop where those errors can actually be noted and submitted,” he said.

“We instituted this process whereby the writers submit [the material]…. We have editors just for English or Filipino. It passes through [another] editor, proofreader. The more recent one [is someone checks on] the cultural sensitivity. Before that, the actual content [is also checked]. So, there are at least four layers of correction,” Luistro said.

“We still have problems because of the sheer volume [of the materials], there are errors that are not caught…. What’s critical are the gross errors.”