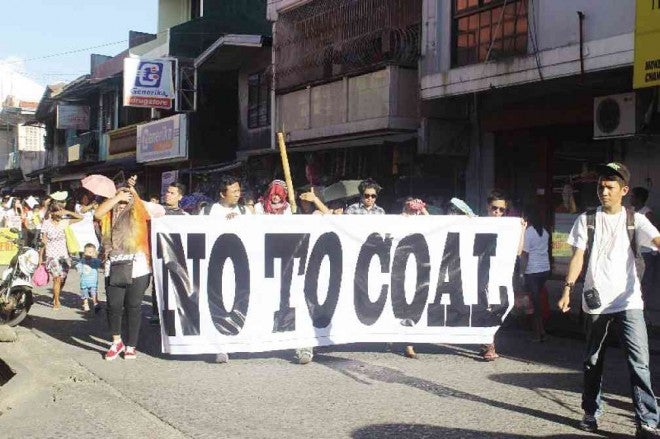 LUCENA CITY—More than 1,500 protesters, led by Church leaders, staged a procession in Atimonan, Quezon province on Thursday to dramatize opposition to the proposed 1,200-megawatt (MW) coal-fired power plant in the town that faces the Pacific Ocean, some 173 kilometers south of Manila.

Dubbed as “Lakad-Dasal-Bibliya para sa Kalikasan,” the procession first went around town before stopping in front of the municipal hall for a short program. The marchers proceeded to the town’s Our Lady of the Angels Parish Church grounds for an overnight vigil.

The program at the church compound was filled with passionate speeches against coal-fired power plants, protest songs and dances, Calabano said.

In a statement, the protesters urged the public “to stand up and demand that governments and energy producers respect the (people’s) fundamental right to breathe clean air and not see it as a threat to their profits.”

Originally, plant proponent Meralco PowerGen planned to put up a liquefied natural gas (LNG) combined cycle power plant on a 80-hectare land in Barangay Villa Ibaba. However, Meralco converted the project to a coal plant in the absence of a government policy supporting the LNG industry.

The local government has already approved the project that would generate 1,000 to 2,000 jobs for local construction workers aside from a tax windfall expected from the plant’s operations.

Quezon province is already host to two coal-fired power plants. The existing 735-MW plant in Pagbilao town facing Tayabas Bay is now being extended with an additional 420-MW plant. Mauban town, also along the shores of the Pacific Ocean, is host to a 1,500-MW plant.