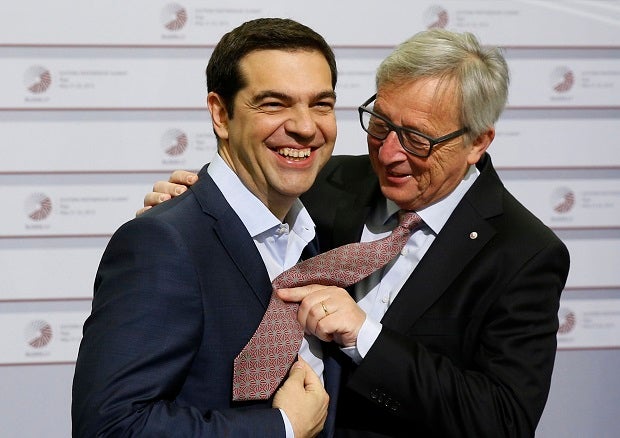 In this Friday, May 22, 2015 file photo, European Commission President Jean-Claude Juncker, right, pushes his tie up against the shirt of Greek Prime Minister Alexis Tsipras during a recent meeting in Riga, Latvia. Tsipras is heading to Brussels Wednesday, June 3, 2015 to discuss his radical-left government’s proposal for a long-delayed deal with Greece’s creditors that Athens hopes will unlock vitally needed bailout funds. Tsipras was invited to Brussels by Juncker, with whom he was to meet for talks Wednesday evening, a Greek government official said. AP

Or will it, in the absence of a new deal with its official creditors, dare default on the global crisis lender which has joined two massive bailouts of the Greek economy?

Athens is scheduled to repay $1.6 billion euros ($1.8 billion) to the IMF in four steps between now and June 19. The first payment is around 300 million euros due on Friday.

But to make those payments, Athens needs to access more funds from the European Commission, the European Central Bank and the IMF, specifically a $7.2 billion transfer under the current Greece bailout program that has been held up for months as the two sides wrangle over the conditions tied to the money.

If the first loan repayment does not arrive on Friday night, the axe falls: Greece will be considered officially in arrears, and will not be eligible to receive any of the 16.5 billion euros in financial support that the IMF has committed to support the country through 2016.

That risks pushing the already destitute Greek economy further into the abyss.

So far the Greek government, led by the Syriza party, has left unclear whether it will make the payment, while it continues talks with creditors over the conditions for a new deal.

At the end of May, Interior Minister Nikos Voutsis warned that Athens had “no money” to make the repayments to the IMF.

But after that the government stressed it would pay its debts, if it was in the position to do so.

As of late Wednesday, crunch talks between Greek Prime Minister Alexis Tsipras and European Commission chief Jean-Claude Juncker were unable to bridge the gap between the two sides, pushing Athens ever closer to default, with the consequences of that not all clear.

But the IMF has remained stone-faced. “We expect the Greek authorities will pay us,” a Fund spokesman said last week.

One suggestion to buy time for a deal has been that Athens group all of its June IMF payments into one and deliver the money at the end of the month.

But the country has not asked to do that, a source told AFP Wednesday.

A default is definitely possible, said analysts at Commerzbank.

“Without fresh bailout funds, the Greek government is unlikely to have the money to meet the mid-June repayments,” they said.

“This would be a red flag,” Domenico Lombardi, a former member of the IMF board, told AFP.

The shock of a default could spur the Europeans to raise the pressure on Greece, including a move by the ECB to tighten the flow of funds that have propped up Greek banks during the crisis, notes Lombardi.

“The ECB could decide to make the funding of the Greek banks more complicated, even vitally impossible,” he said.

A Greek default on IMF loans would place the country among a few such countries, with the others all at least able to blame war (Afghanistan, Iraq, Yugoslavia) or a political turmoil (Haiti).

But the IMF itself would not come out unscathed. It put its credibility with its members at risk in helping arrange and manage the rescue of Greece with the largest bailout loans the Fund has ever approved.

Those loans were sharply contested inside the institution, and non-payment could renew the controversy.

But analysts do not expect a default on the IMF to lead to the disaster scenario of “Grexit” — Greece’s exit from the Eurozone.

“The assumption that Greece will get out of the Eurozone if it misses a payment is completely unwarranted,” said Lombardi.

“If Greece does not service one of these instalments to the IMF, Grexit would undoubtedly be another step closer. But it is unlikely to happen in the near-term.”