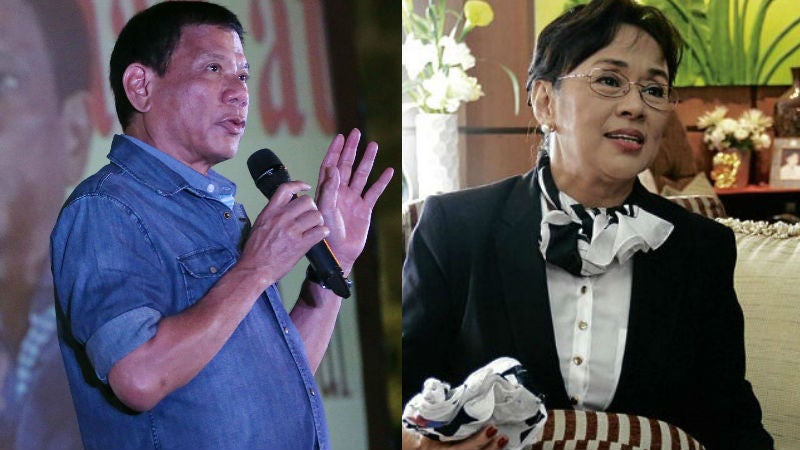 DAVAO CITY, Philippines—For someone who keeps insisting he is not running for President, Mayor Rodrigo Duterte appears to have his “dream team” down pat.

Recounting their conversation during a trip from Antique to this city last week, staunch Duterte supporter and former North Cotabato Gov.   Emmanuel Piñol said the feisty mayor talked for the first time about the possibility of running in 2016 and who his dream running mate would be.

Piñol said it took Duterte sometime to answer the question but when he did, he was candid.

“It can’t be Grace Poe because I think she has decided to run for President,” Piñol recalled Duterte saying.

Duterte, he said, went on to say that “Vilma Santos would be a good choice.” Aside from Piñol, Christopher Go, a Duterte aide, was on the same flight and was seated close to them.

Go said he agreed that Santos would be a good choice because the Batangas governor did not only have star power but was also an outstanding government official.

Besides, she has not been tainted by corruption.

Piñol said Santos would be a good choice and her “aura of calmness and her infectious smile could soften the otherwise fiery and sometimes firm appearance of Rody Duterte.”

Pressing Duterte, Piñol said he asked the mayor about the composition of his Cabinet if he won the presidency.

Duterte, he said, did not think twice about naming Gilbert Teodoro for the defense department because “he is brilliant.”

“The guy is highly respected in the business community,” Piñol quoted Duterte as saying.

For the interior department, Piñol said former Interior Secretary Rafael Alunan III would be Duterte’s choice, along with an unnamed “Visayan governor.”

For the Department of Justice, he said Duterte had two names in mind, including that of Vitaliano Aguirre, the bar topnotcher who gained media attention when he covered his ears as Sen. Miriam Defensor-Santiago was speaking during the impeachment trial of former Chief Justice Renato Corona.

If he had his way, Camarines Sur Rep. Leni Robredo would be social welfare secretary.

“She looks very motherly and calm. And anybody who has been through a painful tragedy is more compassionate and emotional. That’s the kind of leader we need in serving the poor and unfortunate,” Piñol quoted Duterte as saying.

“Of course, these people are just my personal choices. A responsible leader should conduct a thorough vetting process to choose his working team,” Duterte added.

During his visit to Matanao, Davao del Sur, on Sunday, Duterte also wowed the crowd of some 10,000 when he said that if he had his way, he would spare those earning P25,000 and less from paying income tax.

“I have asked a policeman how much his take home pay is; he said only 1,000 because he has four children in college. How ironic is that?” Duterte said.

Duterte said he would also seek to increase the take-home pay of teachers.

“How can they not borrow when their take-home pay is only about P600?” Duterte asked.

He reiterated his earlier statement that irrigation water should be free so that whatever farmers earn would go to the needs of their families.

Duterte then teased the crowd with: “Are you going to vote for me?”

The crowd responded with a resounding “yes,” to which Duterte replied: “If I lose in Matanao, I’ll bar you from Davao.”

On a serious note, Duterte urged the crowd not to be swayed by popularity.

“Look at the performance,” he said, adding that courage and persistence would make the Philippines a better country.–Allan Nawal, with reports from Eldie Aguirre and Orlando Dinoy, Inquirer Mindanao