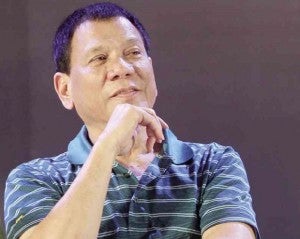 DAGUPAN CITY, Pangasinan, Philippines – Amid rumors of an impending coup d’état and with the peace process in doubt after the Mamasapano debacle, Davao City Mayor Rodrigo Duterte said he could run for President in the 2016 elections, if only to save the country from war.

Duterte made this declaration at the Lyceum-Northwestern University in Dagupan, amid months of speculation over his political plans, given that he had been going around the country for a “listening tour.”

Talking before at least 2,000 participants of the first federalism forum in Northern Luzon, Duterte, 69, offered himself as an option in the 2016 elections, saying his brand of leadership could help the country — already confronted with problems on corruption, criminality and the possible collapse of the peace talks in southern Philippines — avoid imminent disaster.

“If only to save this Republic, I can run for President,” said Duterte, who spent at least three decades of his life as a politician, 22 of them as the tough-talking, crime-fighting mayor of Davao City,

“I can make this sacrifice if only to save this country from being fractured,” he added.

Asked to clarify his statement, Duterte told reporters later that it was not his ambition to become president and he only wanted to share his vision for the country.

“I was personifying (the presidency) to talk about it. I was just referring to the problems of the country… That is why I said that was my vision, not my ambition. That is my advice to whoever becomes president,” he said.

“Anybody of us could be the solution (to the country’s problems) but I have no money. That is why I am taking myself out of the loop because I have no money. You need P10 to P15 billion [to wage a presidential campaign]. You can ask for money but at what price would you get it? Even money has a price,” he said.

He said he has been visiting provinces in Northern Luzon to campaign for a shift of the system of government to federalism, which, he said “the country can’t have unless the president embraces it.”

Duterte earlier warned that unless the national government could come up with a back-up plan to prevent the collapse of the peace process, Central Mindanao would slide back into bloody hostilities.

“Let this be a fair warning to our national leaders. The indicators of an eruption of violence in the Central Mindanao area are becoming very evident,” he said in Dipolog City last week.

He said that if the national government failed to come up with a back-up plan for the Bangsamoro Basic Law (BBL), which could be rejected by Congress and the Senate following the Mamasapano carnage, the whole peace process would collapse, triggering a fresh wave of violence in Central Mindanao.

He warned that if conflict erupted again, warfare would no longer be the same as in the 1970s when the Moro rebel groups were equipped with World War II vintage guns.

“The people involved in the televised investigation of the Mamasapano incident may not really care, but we who live in Mindanao and who have experienced the horrors of the conflict are getting scared,” Duterte said.

“Remember that if there is a breakdown in the peace negotiations, we in Mindanao will be the first ones to suffer and it is sad that nobody in Manila seems to realize this,” he said.

Is the Philippines ready for Duterte in 2016?