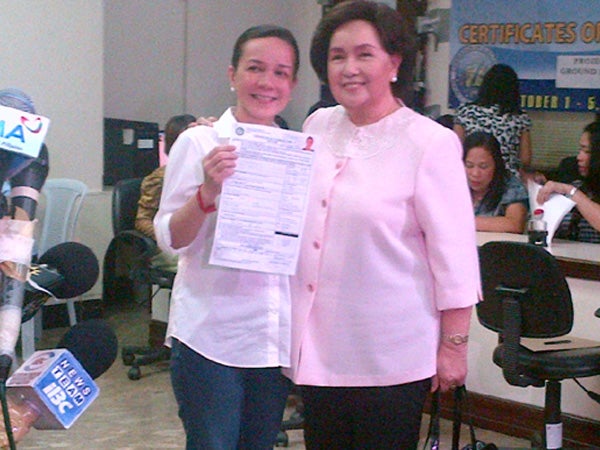 Grace Poe (shown with her mother, Susan Roces) shows her certificate of candidacy in 2012. According to the Binay camp, she is unqualified to run for Vice President, much less for President, because she does not meet the 10-year residency requirement for those running for President and Vice President. File photo

Having failed to convince Sen. Grace Poe to run as Vice President Jejomar Binay’s running mate, the Binay camp has belatedly found that Poe is unqualified to run for Vice President, much less for President.

Poe does not meet the 10-year residency requirement for those running for President and Vice President, he said.

According to Tiangco, he had checked the certificate of candidacy that Poe filed in 2010 when she ran for senator which he got from the Commission on Elections website. It showed that the senator had declared that she was a resident of the Philippines for six years and six months by Election Day, May 13, 2013.

By Election Day in 2016, Poe would have resided in the Philippines for only nine years and six months—six months short of the requirement, Tiangco said.

In a press conference he called at the House of Representatives later on Tuesday, Tiangco waved a copy of the certificate of candidacy (COC) that Poe had filed in May 2013.

Tiangco said he was willing to take the matter to court in his personal capacity.

Reminded that Binay himself wanted Poe as a running mate, he said Binay was “just being polite” as the latter was aware of Poe’s residency problem.

Contacted for comment, Poe’s office on Tuesday night said the senator would “answer all queries” before the start of the Senate session on Wednesday.

Amid speculations that she is considering running for President or Vice President, Poe outlined what she would want in a political partner during a visit to Dagupan City on Tuesday.

She said she wanted someone who was sincere and could be trusted because “we could be campaigning together and I wouldn’t want him or her to abandon me in the middle of the campaign.”

Poe said personality was important. “Is he/she good? Is he/she industrious? Has he/she no cases like plunder?” she said.

“Can he/she help our objectives for the people? It is nothing if he/she is the best but the character is questionable,” she said.

Another requirement for a running mate is that he or she should mirror the characteristics of her late father, the movie star and 2004 presidential candidate Fernando Poe Jr., whom she described as “decent, sincere, close to poor people, [and someone who] did not take advantage of others.”

“My father, when he had [to shoot a film] in the mountains, he would work for the irrigation of farmlands because the farmers there are poor. He helped even the NPA (New People’s Army) rebels because they, too, are Filipinos,” she said.

She said her late father’s name remained her biggest “capital” in the political arena, although she said she had learned enough to begin carving out her own political identity.

Asked if she would pursue the presidency—on a scale of 1 to 10, with 10 reflecting that she was most certain—Poe said: “Now it is 5. It used to be much lower.”

Meanwhile, Binay claimed Tuesday that the “group” of Interior Secretary Mar Roxas was out to destroy Poe because Roxas wants the presidential fight in 2016 to be only between him and Binay.

Speaking in a radio interview, Binay said the Roxas group, apparently referring to the ruling Liberal Party (LP), was bent on “targeting” Poe, who is fast closing in on Binay’s lead in the presidential preference surveys.

“[They want] for Mar Roxas and I to have a one-on-one [fight]. For that to happen, they have to destroy Grace Poe,” he said.

Poe earlier ruled out teaming up with Binay, who wanted her to be his running mate, saying they have different styles of leadership.–With reports from Yolanda Sotelo and Gabriel Cardinoza, Inquirer Northern Luzon

Grace Poe lacks residency, not qualified to run for president or VP – solon