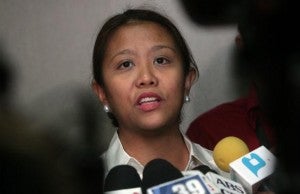 Senator Nancy Binay dared her colleagues, who signed a committee report against her father, Vice President Jejomar Binay, to admit their “personal motives,” saying some of them did so just to boost their chances in the upcoming elections.

“My colleagues have their own reasons for signing and I respect that. But I wish those who signed it thinking it would boost their plans to run for president or vice president will be candid enough to admit their personal motives,” Binay said in a statement.

She was referring to 10 senators who affixed their signatures to the Senate blue ribbon subcommittee’s report that recommended the filing of plunder charges, among others, against the Vice President, son Makati Mayor Jejomar Erwin “JunJun” Binay, and other personalities involved in the alleged overpricing of the Makati City Hall 2 parking building.

READ: Trillanes: I will run for vice president in 2016 | Administration allies batting for Poe-Roxas or Poe-Escudero

“I was not surprised by their decision to sign the report. I only hope that they realize soon enough that the report they signed, despite taking 21 hearings in order to be completed, will be useless when it reaches the Ombudsman,” Senator Binay said.

It was likely, she said that some of the 10 senators who signed the report did so, thinking that it would boost their chances at getting higher results during the survey period.

(It’s all about the survey, and because it’s survey period now, they just want to be noticed and talked about by the media. Because of this, they no longer mind bullying people identified with my father and condoning the lies and muckraking perpetrated by their witnesses.)

(To those who want to be president or vice president, just tell the people what you stand for, not what you stand against. It’s easy to say that you oppose something or someone, but what do you propose to solve the problems of the poor?)

Senator Binay said it was unfortunate that the Filipino people were being led to believe that the draft report had any shred of credibility when it contains only inadmissible evidence and a recommendation that was based exclusively on the malicious statements of defeated local politicians.

(So why did it take 21 hearings to come out with a partial report? Why don’t they tell the people how much they have spent for these pointless hearings? The results are just the same—their recommendation will be deemed useless since there is already an ongoing investigation.) IDL