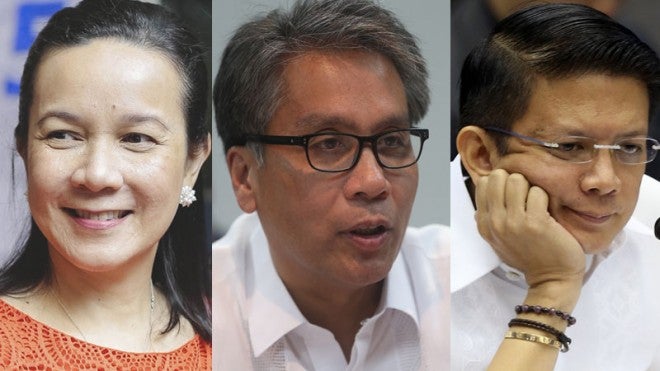 With the 2016 presidential election just a year away, administration allies are coming out to lobby for a Grace Poe-Mar Roxas tandem—or maybe a youthful, baggage-free team of Senators Grace Poe and Francis “Chiz” Escudero.

Whatever team the administration will field, it seems certain that President Aquino’s allies will be facing a ticket headed by the scandal-plagued Vice President Jejomar Binay.

Aquino has said he will reveal the administration’s standard-bearer in June.

This early, some members of the ruling Liberal Party (LP) seem open to the possibility of Interior Secretary Mar Roxas again sliding down to a vice presidential candidacy, in favor of the neophyte Poe.

“For me, Grace Poe and Chiz are the real ‘pusong Pinoy,’” said Deputy Speaker Neptali Gonzales II, the highest-ranking LP leader who has openly lobbied for a Grace-Chiz ticket.

“They represent the new breed of public servants who feel the pulse of the people. Together they will embody the hope for a new leadership whose perspective is the highest ideal of trust and accountability.”

But Budget Secretary Florencio Abad made it clear on Sunday that the administration party was focused on a Roxas-Poe tandem, saying that “is not only a serious proposition but a more desirable and likely to be advantageous one for the country in the long term.”

“Of course, with 12 months to go [before] the elections and considering the unpredictable nature of Philippine presidential politics, many things can still happen, including a Poe-Mar combination,” Abad told the Inquirer in a series of text messages.

Roxas first gave way to then Sen. Benigno Aquino III, who became the LP standard-bearer in the 2010 election.

Following his political “sacrifice,” Roxas got choice positions in the administration and is now its presumptive presidential candidate in 2016.

But Poe has emerged as another option, having registered better numbers than Roxas in surveys on possible presidential candidates.

Abad, LP campaign manager in the 2010 elections, said it was “still premature to conclude” that Roxas’ poor showing would relegate him to becoming Poe’s running mate.

“If talks work out fine and Poe accedes, a Roxas-Poe tandem is still to be declared,” Abad said. “Those events, separately, can boost any candidacy, much more so [that of] Roxas.”

Aquino, the LP chair, has admitted talking to possible candidates, including Poe, who placed second to Binay in the March 20-23 survey of the Social Weather Stations (SWS).

Binay topped the survey with 36 percent followed by Poe who got 31 percent. Roxas was tied with Davao City Mayor Rodrigo Duterte at third with 15 percent

Abad acknowledged that continuing allegations about Binay’s supposed corruption would help convince voters to go for the administration ticket in 2016.

Aquino earlier urged voters to go for a candidate who would continue “what we have started,” including his promise to curb corruption in the government.

The Court of Appeals has issued a freeze order on Binay’s bank accounts, including those of his family and alleged dummies. The order was based on an Anti-Money Laundering Council (AMLC) report that showed multimillion-peso transactions in the accounts suspected to be from illegal activities.

“It is damning enough that the findings of the AMLC and the Court of Appeals are now out in public,” Abad said.

“That can only strengthen the position of the administration tandem who will expectedly stand on a strong anticorruption and good governance platform.”