Pile up on NLEx sets off heavy traffic 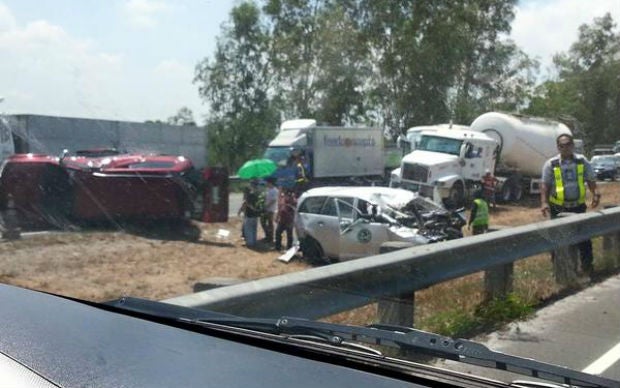 At least 10 vehicles figured in a multiple collision on the North Luzon Expressway (NLEx) in Pampanga on Monday morning with four persons sustaining minor injuries.

According to NLEx spokesperson Francisco Dagohoy, the accident involving three trailer trucks and seven cars happened around 10 a.m at the northbound lane near San Fernando Exit.

Dagohoy said one southbound lane had been opened for northbound vehicles to ease the heavy traffic in the area.

According to Robyn Ignacio, head of Nlex traffic management and safety department, an earlier accident at about 9 a.m. involving a Mitsubishi Pajero caused heavy traffic near the San Fernando Exit northbound.

Some of the cars involved in the mishap included a Toyota Innova, a Ford Everest and a Mitsubishi Montero.

As of 11:45 a.m, NLEx said traffic was light to moderate in all areas except the northbound lanes between San Simon and San Fernando. AJH