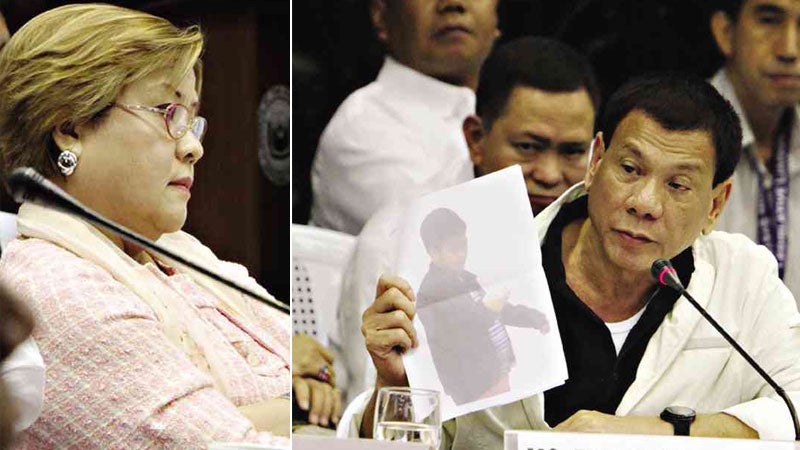 The word war between the two heated up once more after Duterte was again criticized by the New York-based group Human Rights Watch for his alleged involvement in the vigilante-style killings targeting criminals in his city.

De Lima said Duterte should face the law and should not be idolized for his alleged “Punisher” type of justice, most especially after he ranked third in the latest survey of possible presidential candidates.

Duterte was dubbed “The Punisher” after the popular Marvel Comics character who uses violence and coercion to shut down the mob and stop criminality after his wife and children were killed in a shootout.

“She arrested Arroyo and her husband at the airport and did not allow them to fly out. At the time there was no case yet filed in court,” Duterte said on his Sunday television show “Gikan sa Masa, Para sa Masa” in Davao.

In November 2011, Arroyo and former first gentleman Jose Miguel Arroyo went to the international airport to board a plane and reportedly seek medical treatment abroad but were prevented from leaving the country by the authorities.

She was then escorted by the police back to her hospital detention suite and an arrest warrant for election fraud against her arrived days after the incident.

“We all know that one can be arrested only if there is a warrant of arrest and you cannot be stopped at the airport unless there is a hold departure order,” Duterte said.

De Lima at the time declared that she was relieved that justice had been served. There were protests from Arroyo’s camp about illegal detention and depriving her of the right to travel but these were stifled apparently due to her unpopularity.

“Actually, what they did was they kidnapped or forced the Arroyos to go with them,” Duterte said.

The government defended the act explaining that Arroyo was being investigated for many issues including corruption and wiretapping.

Duterte on Sunday continued his tirade against De Lima, claiming that he had in his possession records of illegal and anomalous activities at the New Bilibid Prison in Muntinlupa City, which is under the jurisdiction of the Department of Justice (DOJ).

“I have the records already. If she has the NBI (National Bureau of Investigation), I also have my own. They let prisoners out for kidnapping purposes and holdups, and then they go on a furlough. A furlough is a vacation from jail. And they are into kidnapping and holdups, then they go back in and they share the loot with prison officials. I am only wondering, what about the DOJ secretary?” Duterte said.

The tough-talking mayor said he warned De Lima about the criminal activities at the prison about nine months ago but the DOJ acted on them only recently.

“That warning was given almost eight or nine months ago. She only acted very recently,” Duterte said.

“Which is more serious, your claim that I kill criminals or your prison where they manufacture shabu, where women are allowed to enter, where they record albums and where there is a night club? How about the lives destroyed by these prisoners?” Duterte said.

Narrating the history of the so-called Davao Death Squad, Duterte said it started at the height of the partisan activities of the New People’s Army’s Special Partisan Unit (Sparu) and the anticommunist witch hunt and vigilante campaign of the Alsa Masa.

“She (De Lima) does not know the history. DDS was created by the Alsa Masa movement to counter the Sparu here,” Duterte said.

He said the speculations about himself only started after reports came out that he was involved with the death squad.

“They railed against me. I have my own DDS—the Davao Development System. If you are referring to a squad, I am not involved in that. I never ordered the killing of anybody,” Duterte said.

The mayor, however, admitted that he gave direct orders to the local police to take down criminals but only if the cops’ lives were in danger.