By: Kristine Felisse Mangunay, Maricar B. Brizuela - @inquirerdotnet
Philippine Daily Inquirer / 05:57 AM May 29, 2015 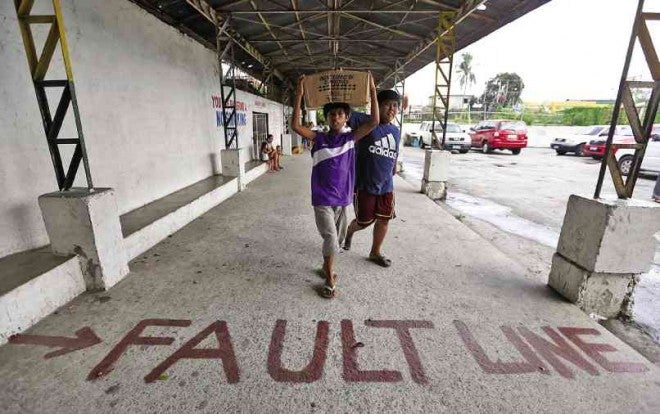 FAULT-FINDING  It’s probably the scariest street sign you will encounter these days. Phivolcs staff members have painted the sidewalk outside Buli Elementary School in Muntinlupa City to mark the path of the West Valley Fault.  Photo by Lyn Rillon

The magnitude of Metro Manila’s preparations for the Big One seems to grow by the day.

This time, officials will go street by street to again mark the path or critical points of the West Valley Fault, which experts say is ripe for a potentially devastating movement after 400 years of inactivity.

The Philippine Institute of Volcanology and Seismology (Phivolcs) has been particularly aggressive in raising awareness about the 100-km fault line since releasing last week a set of maps detailing its location in the capital and nearby provinces.

Together with Phivolcs, the Metropolitan Manila Development Authority (MMDA) on Thursday said it would conduct site inspections to put markers corresponding to the maps, adding to those already put up by Phivolcs years ago.

MMDA Chair Francis Tolentino said the activity, dubbed “Walk the Fault,” was suggested by the officials of 84 barangays (villages) which are directly in the fault line’s path.

The inspection will double as an information campaign and feature an MMDA motorcade on June 5 starting from Bulacan province, crossing Metro Manila, and ending in Laguna province.

“The markings are just a continuing reminder. But more than the physical signs, all of us should have a culture of preparedness,” Tolentino told reporters.

In the event of a major quake, for example, people should know what to do when power or communication lines are down, he added. This will be the topic of the MMDA’s next meeting with Metro Manila mayors before the Walk the Fault.

Meanwhile, the Department of Education said the reopening of classes in two Muntinlupa City public schools that were found to be near the fault line would push through on
Monday.

De Gulan said five buildings in Pedro E. Diaz would not be used at the moment but the students affected by their temporary closure would be accommodated at the school’s Alternative Learning System Center.

At Alabang Elementary School, one building of questionable stability had already been demolished while another was being checked by the city engineering office, De Gulan added.

At Buli Elementary School also in Muntinlupa, the classes would resume later, on June 8, due to the temporary closure of three buildings situated near the fault line and the need to prepare alternative rooms for the affected students.

Education Secretary Armin Luistro, who inspected the three Muntinlupa schools on Thursday, said a composite inspection team from his department, the city engineering office, the Department of Public Works and Highways and Phivolcs would later decide whether the shuttered school buildings should already be demolished.–With Ariana Michaela Lopez, Celine Palenzuela and Dan Joseph Romerosa, trainees