Aquino hopeful he can sway senators to back BBL 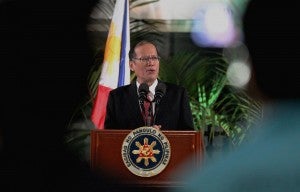 Malacañang is optimistic that a meeting with President Aquino, similar to the one he had with lawmakers from the House of Representatives, can convince senators to support his version of the Bangsamoro Basic Law. (Photo by Robert Viñas/ Malacañang Photo Bureau)

Malacañang is optimistic that a meeting with President Aquino, similar to the one he had with lawmakers from the House of Representatives, can convince senators to support his version of the Bangsamoro Basic Law (BBL).

While the Palace got its wish in the Aquino-controlled House of Representatives, senators have expressed major reservations on the BBL, reflected in their support of a report produced by the committee on constitutional amendments headed by Sen. Miriam Defensor-Santiago.

Besides Santiago, 11 other senators agreed that the BBL draft should include “substantial” revisions to conform to the Constitution.

Reacting to the senators’ reservations, presidential spokesperson Abigail Valte said the Palace was “not alien to the challenges especially when it comes to the process that we have been undergoing for the BBL.”

“We’re optimistic that the President can ably put forth the position of government when it comes to the BBL,” she replied when asked if a meeting with the President could make these senators change their minds.

The Malacañang version of the BBL was swiftly approved by a House ad hoc committee after many of its members met with the President ahead of the crucial vote.

Criticized for trying to influence the committee vote, Aquino earlier said a separate meeting with senators would depend on the advice of Senate President Franklin Drilon.

“We’ve always said that we recognize the independence of both Houses of Congress and that, of course, they can propose amendments to any piece of legislation that we work with them,” Valte said.

“So at this point, we look forward to the opportunity really to continually discuss the administration’s position on the BBL with senators.”

The Palace claimed pork barrel would not be on the table if and when the President sat down with senators to discuss the BBL.

“Well, obviously, we don’t agree with the premise because we don’t have what you formerly knew as the PDAF (Priority Development Assistance Fund) existing in the 2015 GAA (General Appropriations Act),” Valte said.

“Perhaps the only inducement that we would have in mind is the ability of the region to grow once this is passed. It’s not for us. It’s really for our brothers and sisters who are down there who have been asking for a shot at a normal life without the guns and without the noise,” she added.

Aquino open to dialogue with senators on BBL