Floodwaters deepen in Houston after city gets more rain 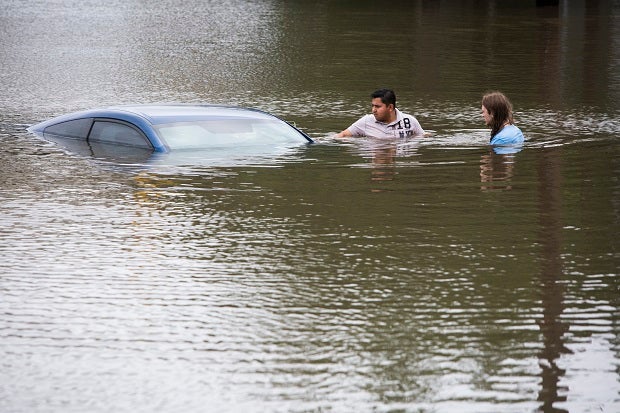 Roberto Salas, left, and Lewis Sternhagen check a flooded car on the frontage road between South Loop West Freeway and South Post Oak Road near the Willow Waterhole Bayou, Tuesday, May 26, 2015, in Houston, Texas. Floodwaters kept rising Tuesday across much of Texas as storms dumped almost another foot of rain on the Houston area, stranding hundreds of motorists and inundating the highways. AP

HOUSTON, United States — Floodwaters deepened across much of Texas on Tuesday as storms dumped almost another foot (30 centimeters) of rain on the Houston area, stranding hundreds of motorists and inundating the famously congested highways that serve the fourth-largest U.S. city. 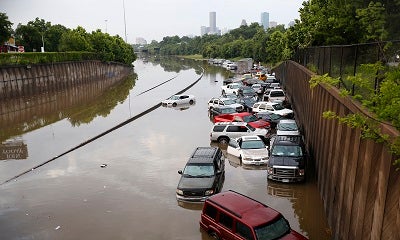 Motorists are stranded along I-45 along North Main in Houston after storms flooded the area, Tuesday, May 26, 2015. Overnight heavy rains caused flooding closing some portions of major highways in the Houston area. AP

Meanwhile, the search went on for at least 13 people who were still missing, including a group that disappeared after a vacation home was swept down the river and slammed into a bridge.

Several more fatalities were reported — four in Houston and one more in Central Texas. That brought to 14 the number of people killed by the holiday weekend storms in Texas and Oklahoma.

The water rose sharply overnight as about 11 more inches (28 more centimeters) of rain fell, much of it in a six-hour period. By Tuesday evening, most rivers had receded back within their banks.

The floodwaters affected virtually every part of the city and paralyzed some areas. Firefighters carried out more than 500 water rescues, most involving stranded motorists. At least 2,500 vehicles were abandoned by drivers seeking higher ground, officials said.

“Given the magnitude and how quickly it happened, in such a short period of time, I’ve never seen this before,” said Rick Flanagan, Houston’s emergency management coordinator.

The drenching weather threatened to linger. National Weather Service forecasts called for a 20 to 40 percent chance of thunderstorms through the rest of the week in Houston.

The flooding closed several highways, and the ones that stayed open became a gridlocked mess.

Interstate 45 near downtown was backed up for miles on Tuesday morning, and a handful of motorists traveled the wrong way on the highway to retreat from high water.

The small cars weaved between massive 18-wheelers as other drivers stared at them in disbelief. With no end to the backup in sight, some drivers got off the freeway, only to be held up again by water covering nearby access roads.

Some motorists were stuck on I-45 all night, sleeping in their cars until the backup was cleared about 8 a.m.

NBA fans at the Toyota Center, where the Houston Rockets hosted a Western Conference finals game against Golden State on Monday, were asked with about two minutes left in the game not to leave the arena because of the severe weather.

The game ended before 11 p.m., but about 400 people remained in their seats at 1:30 a.m., choosing to stay in the building rather than brave the flooded roads that awaited them outside.

A spokeswoman for the flood district of Harris County, which includes Houston, said up to 700 homes sustained damage.

Crews were also searching for victims and assessing damage just across the Texas-Mexico border in Ciudad Acuna, where a tornado killed 13 people Monday.

Some of the worst flooding in Texas was in Wimberley, a popular tourist town along the Blanco in the corridor between Austin and San Antonio. That’s where the vacation home was swept away.

The “search component” of the mission ended Monday night, meaning no more survivors were expected to be found, said Trey Hatt, a spokesman for the Hays County Emergency Operations Center.

The Blanco crested above 40 feet (12 meters) — more than triple its flood stage of 13 feet (3.9 meters). Rescuers used pontoon boats and a helicopter to pull people out.

Hundreds of trees along the Blanco were uprooted or snapped, and they collected in piles of debris up to 20 feet (6 meters) high.

In Ciudad Acuna, Mayor Evaristo Perez Rivera said 300 people were treated at local hospitals after the twister, and up to 200 homes had been completely destroyed in the city of 125,000 across from Del Rio, Texas.