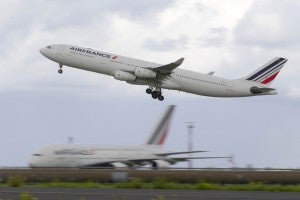 This file picture dated on August 18, 2014 shows an Air France Airbus 340 aircraft taking off at the Roissy-Charles-de-Gaulle airport, in Roissy-en-France. Air France said it was suspending its flights to Sierra Leone from August 27, 2014 because of an Ebola outbreak that has killed at least 1,400 people in West Africa. AFP

PARIS, France – French accident investigators have opened an inquiry into a near accident involving an Air France Boeing 777 which narrowly missed central Africa’s highest mountain with 37 people on board.

An automatic “pull up” alarm went off when the plane, travelling from Malabo, the capital of Equatorial Guinea, to Douala, Cameroon’s largest city on May 2, diverted from its normal route “to avoid storms,” the BEA accident investigators said.

That maneuver had put it on course to hit the 4,040-metre (13,255-foot) Mount Cameroon, before the alarm prompted the pilots to swiftly gain altitude and miss the mountain.

No-one was injured and the plane continued its flight without further incident.

Air France confirmed the incident, saying that it would be carrying out its own internal inquiry.

“A route to avoid a storm brought the plane toward the side of Mount Cameroon,” it said in a statement.

The EGPWS (enhanced ground proximity warning system) went off in the plane’s cockpit and “the pilots to respond immediately by executing the appropriate maneuver,” Air France added.