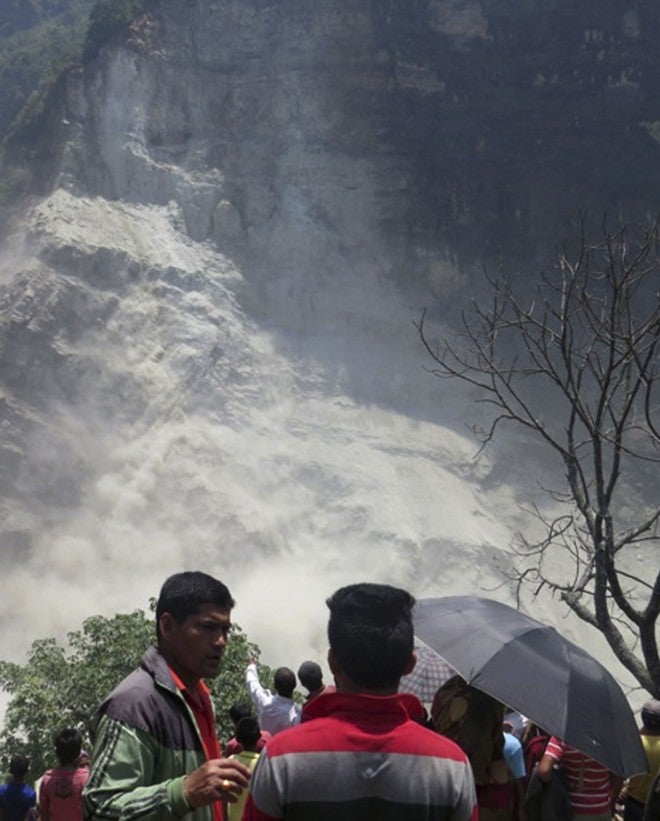 People gather at the site of a landslide north of Beni Bazaar, Nepal, Sunday, May 24, 2015. Thousands of people fled villages and towns along a mountain river in northwest Nepal on Sunday after it was blocked by a landslide that could burst and cause flash floods, officials said.  AP PHOTO/M.B. ASTHA

“We have evacuated about 100 people from the affected area. People in other villages don’t need immediate rescue but thousands have left on their own,” Chokhal told AFP.

“The artificial lake has begun to overflow the dam… but there does not appear to be any risk of flooding,” Dhakal said.

An army helicopter carrying soldiers and geologists had reached the site earlier in the day and officials were monitoring the water flow closely, Dhakal said.

“Once the soft soil flows away with the water, security forces might blast holes into the hard rocks blocking the river but we have to be very careful to ensure that there is no sudden surge,” he said.

“After the two quakes, villagers have reported several minor landslides and late last night they said the hill just came down,” Sharma said.

“We cannot immediately assess the risk of flash floods but people are obviously scared that the artificial dam will burst suddenly and submerge their homes.”

No one was hurt in the landslide, according to officials.

But police have issued an alert for villagers living along the river, which begins near the Nepal-China border and flows into northern India, eventually joining the Ganges.

The snow-fed waters are also the site of Nepal’s largest hydroelectric project that generates 144 megawatts of power, located south of the landslide-blocked area.