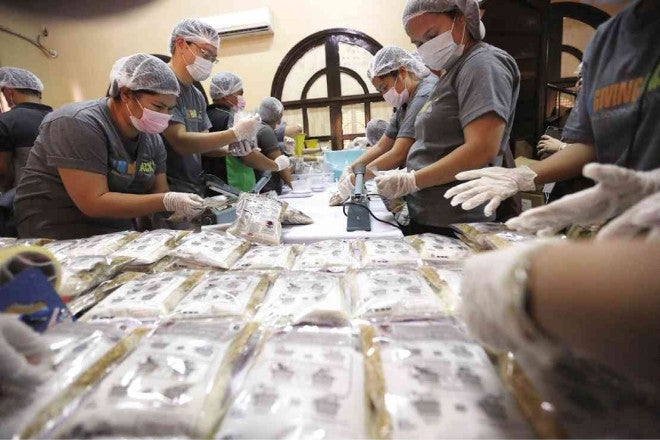 On a hot Friday morning, somewhere in Manila, dance music filled a room of about 50 college students and young professionals. And every 10 minutes or so, the crowd would erupt in cheers and applause.

It was not a party that had gone on for too long but an outreach project that enlisted youthful volunteers to sort, pack and send out healthy food for as many malnourished children as possible across the country.

The upbeat music obviously took their minds off their monotonous task. But why the intermittent clapping?

“Every time they do that, it means somebody has finished packing a box of meals,” said Anna Leah Sarabia, director of Gota de Leche. For a charity nongovernment organization founded 109 years ago, it has surely found ways to make its serious mission fun and always fresh.

Gota de Leche was first known as Asociación Feminista Filipina and later as La Proteccion de la Infancia. It was established in 1906 during the American colonial period by Trinidad Rizal (one of the sisters of national hero Dr. Jose Rizal) and Concepcion Felix to help address the high infant mortality rate in the country at the time.

According to Sarabia, Rizal, Felix and other educated women who formed the organization felt that its establishment was a “political action.”

“If you [nourish] the mothers, you’d be able to save the country, as well as the younger generation,” she said.

That it has weathered several obstacles throughout the years is proof of Gota de Leche’s staying power.

Natividad Almeda Lopez, Sarabia’s grandmother, was Gota de Leche’s president during the Japanese occupation, as well as the presiding justice of courts in Manila. Due to their high regard for Lopez because of her stature, the Japanese promised not to interfere with her court decisions and allow Gota’s operations to go on unhampered.

In fact, the organization was even able to send milk to children in concentration camps, such as the one on the University of Santo Tomas grounds, Sarabia said.

During the Liberation of Manila, Gota de Leche’s headquarters was spared from the shelling as it belonged to an area protected by American troops because of its proximity to where prisoners of war were holed up.

There was also that period during martial law when the organization’s share of the Philippine Charity Sweepstakes Office’s funds was suddenly cut, endangering the monthly benefits enjoyed by 5,000 children.

Despite the setback, the group plowed on, although it had to use its own funds and reduce the number of beneficiaries to 200 children.

The foundation is now a major partner of Stop Hunger Now (SHN) Philippines which mobilized students from Far Eastern University and several nongovernment organizations on May 22.

This year’s sponsor for the meal packs was The Hershey Co., the famous US chocolate maker, which donated $11,600 for the project.

SHN Philippines is targeting some 700 child beneficiaries in the slums of San Andres and Tondo, Manila; Malabon City; San Jose del Monte in Bulacan; as well as in poor communities in Cebu, Iloilo and Capiz provinces.

When SHN Philippines approached Gota de Leche, Sarabia said she felt a renewed sense of hope that they would be able to serve more needy children nationwide.

“Instead of giving them two kilograms [of milk] a month, we can give them just one kilogram and we’ll supplement it with the meals,” she added.

Aside from providing a venue for the volunteers, Gota de Leche and its partner NGOs will be distributing the meal packs to daycare centers in the target communities. The daycare teachers are expected to oversee the meal preparations and actual feeding, and later monitor the children’s improvement until they reach normal weight after six months.

Gota de Leche—Spanish for “drop of milk”—was conceived at a time when the Philippines had one of the highest infant mortality rates in the world.

After the Philippine-American War in 1902, hundreds of infants died within three months of birth, their deaths later traced to breastmilk from mothers infected with beriberi. In response, one of the organization’s first acts was to distribute pasteurized cow’s milk among households.

Each year, hundreds of children are declared “graduates” of the foundation, their health restored and their future made more secure through the feeding program.

“The effects of malnutrition are irreversible. It leads to stunted growth and mental retardation. Its social impact can be seen in the rising number of school dropouts. And you’re talking about roughly four million children here. That’s our future, our next generation,” Fleras said.

“We want to cover as many children as possible. We’re not competing with the government’s feeding program. We’re actually supplementing it by searching for areas where there are no feeding programs,” he added.

Read Next
Did you know: Ramon Valera
EDITORS' PICK
Writers’ groups join outcry over KWF move
Powered by style, innovation and passion
Authors unbowed after gov’t ‘purge’ of books
House energy committee chair Arroyo bats for cheap electricity
Taiwan’s foreign ministry thanks U.S. for maintaining security in Taiwan Strait
A laptop that maximizes your WiFi so you can maximize your productivity
MOST READ
Arjo Atayde reveals proposal to Maine Mendoza was ‘more than a year’ in the making
Angelica Panganiban, Camille Prats recall ‘trauma’ of being called out for weight gain in ‘G-mik’
‘FPJ’s Ang Probinsyano’ officially ends after nearly 7 years
Most wanted person in Cebu arrested — PNP
Don't miss out on the latest news and information.