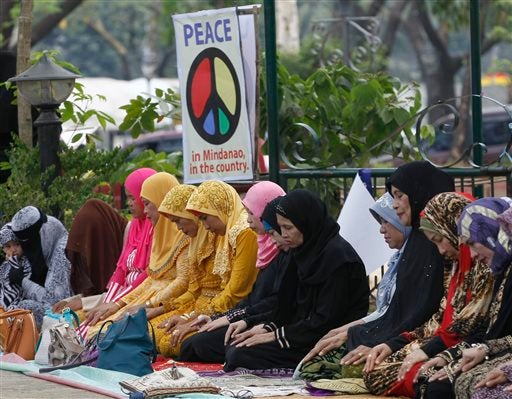 Filipino Muslims pray during an interfaith rally to call for unity and peace in southern Philippines Friday, March 6, 2015 at a park in Quezon city, northeast of Manila, Philippines. AP

THE Armed Forces of the Philippines is optimistic that it can handle any situation if the Bangsamoro Basic Law is not passed by this year as there are many peace advocates on the ground.

An AFP official said the military could deal with any contingency as he called most of the parties to be affected by the passage of the law as “doves” working for peace.

Brig. Gen. Joselito Kakilala, AFP spokesperson, assured the public that they have put in place adequate forces on the ground, adding that he hoped the issue of the draft BBL would not undermine the peace in Mindanao.

“We do believe that the BBL won’t be a major issue (if it is not passed this year). There are a lot of Moro Islamic Liberation Front members who are for peaceful means, who are doves,” Kakilala said.

Last Wednesday, the House of Representatives’ ad hoc committee on the draft BBL voted 50-17, with one abstention, to approve the bill, which will be submitted to at least two other committees for further scrutiny.

The proposed BBL is a vital product of the peace agreement between the Philippine government and the Moro Islamic Liberation Front.

However, Sen. Ferdinand Marcos Jr., chair of the Senate committee on local governments, said it would be difficult for the Senate to approve the bill by June 10, or the last session day before Congress’ adjournment.

Marcos has invited indigenous peoples’ (IP) groups or Lumads and the Sulu sultanate’s members to a hearing on Monday so they could air their views and concerns about the attempt to carve out a new region in Mindanao.

Kakilala is optimistic that the issue of the BBL, if it is not passed on time, will not “undermine the peace in Mindanao.”

“Their overwhelming numbers are for peace, and that will influence the other members who might be hawkish. So we do believe that peace will be sustained in the area,” the AFP spokesperson said.

He expressed confidence there would be no resorting to violence should the draft measure fail to become a law by 2015.

‘God save this country in the future,’ says Biazon on BBL