With less than a year before the 2016 national elections, a youth group on Saturday urged their fellow youths to register and participate in the coming polls.

Youth leaders from different regions in the country gathered at Amoranto Sports Complex in Quezon City and swam in the pool to symbolize their commitment against the “tide of corruption and plunder in government.”

The event was part of the launching of “Isang Milyon, Isang Panata” spearheaded by Kabataan party-list.

“The role of the youth during elections is very important because majority of the voting population comprises the youth sector,” said Charmane Chin, a regional coordinator of Kabataan party-list.

Chin said the youth needed to be empowered toward good governance and part of this advocacy was their participation in the elections.

“We are conducting voter’s education, forum and discussions to encourage the youth and raise their awareness in the coming elections,” she said.

Amid the issues of massive corruption that haunt our lawmakers, Chin said the voters should choose principled candidates who would fight for the interest of the Filipinos and not his personal gains. 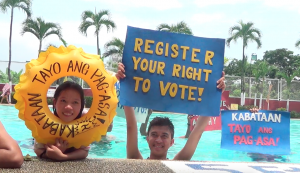 According to Chin, voters should scrutinize well the platforms of candidates especially those who are seeking reelection or higher office.

She said voters should look into the passed bills of lawmakers in Congress and policies implemented by local leaders if these were truly beneficial to the public especially the poor.

“I believe there is still hope in this country,” she said, adding the participation of the youth toward good governance would matter a lot.

She said among the issues that needed to be addressed by our next leaders was the state of education in the Philippines.

Access to free and quality education and decent jobs was a democratic right of every Filipino, she said.

She also mentioned the need for a genuine land reform for poor farmers in the country.

According to Kabataan Rep. Terry Ridon, the vote of the youth sector in the coming elections could make or break a candidate.

He cited the need to have not just an honest leader but also someone who understood the plight of his citizens.

“Let us go out of our homes and schools and participate in the 2016 elections to elect the right leaders and stand for genuine change,” he said.

The Commission on Elections has set the deadline for the last day of voter registration on Oct. 31. RC