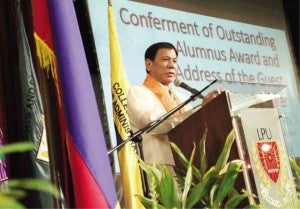 DAVAO CITY – They came from all walks of life with one call: for Mayor Rodrigo Duterte to run as president in 2016.

Some 5,000 people – including women in veil and children – showed up for the “Run Duterte” fun run event here Saturday, which was organized by the Duterte for President Movement headed by Mar Masanguid, who chairs R. Castillo village here.

Masanguid said the turnout was unexpected because they did not foresee children running alongside their parents– including those from the Muslim sector – to show up for the early morning event.

“This was our way of letting Mayor Duterte know that the people are ready to support him in the 2016 Presidential elections,” he said.

Masanguid said the activity here was held simultaneously in other cities in the country by way of initiatives of partner movements. He did not say which other areas the fun run was held.

Duterte for Federalism Movement president and Barangay 23-C chair Alimodin Usman said the huge turnout manifested that people were ready for a Duterte presidency and the federalism he has been advocating.

“I can say that 90 percent of the people here in Mindanao are in favor of federalism, from the LGU to the governors,” Usman said.

But he said it was very important that Duterte runs for president because federalism can only be realized if he becomes the country’s chief executive.

“Like the mayor said, federalism was the best alternative for BBL and if he becomes president, he will fight for federalism,” Usman said.

Duterte have said in previous interviews that he was not running for a higher office in 2016 because he could not afford the expenses.

While he admitted being flattered by the endorsements, he said he was happy being a mayor and might even retire from politics because he was getting older and that he has been suffering from pains due to his unspecified illness.

Duterte is currently 70 and has been mayor here for near-consecutive terms for over a decade now.

But Masanguid said Duterte’s supporters were hopeful he would eventually yield and decide to run for president.

Even televangelist Pastor Apollo Quiboloy, a close friend of Duterte’s, had told the mayor to “listen to the voice of the people.”

Quiboloy said the country needs a leader with Duterte’s caliber and qualities.