Bay of Bengal migrant crisis: The boats and the numbers 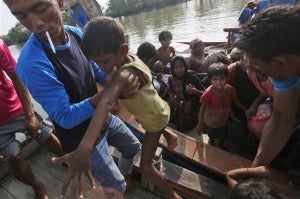 An Acehnese fisherman helps to carry a young boy as boats full of rescued migrants arrive in Simpang Tiga, Aceh province, Indonesia Wednesday, May 20, 2015. In a potential breakthrough in Southeast Asia’s humanitarian crisis, Indonesia and Malaysia offered Wednesday to provide temporary shelter to thousands of migrants stranded at sea after weeks of saying they weren’t welcome. AP PHOTO/BINSAR BAKKARA

BANGKOK–In the past 10 days, nearly 3,000 boatpeople from Myanmar and Bangladesh have been rescued or swam to shore in Malaysia, Indonesia and Thailand.

Several thousand more are believed to be trapped on boats at sea with little food or water in a crisis sparked by smugglers abandoning their human cargo after a Thai crackdown on long-established human-trafficking routes.

Indonesia, Malaysia and Thailand had sparked outrage for driving off some overloaded boats. But there was a breakthrough in the crisis Wednesday when Malaysia and Indonesia said they would no longer turn away migrants.

The following is a regional summary of the current crisis:

More than 1,100 migrants have washed ashore in Malaysia over the past week after people-smuggling gangs dumped migrants in shallow waters off the coast of the resort island of Langkawi.

Some migrants swam to shore after harrowing monthlong journeys at sea, crammed in with hundreds of other people and few supplies.

But after key regional talks Wednesday, Malaysian Foreign Minister Anifah Aman, in a joint press appearance with his Indonesian counterpart Retno Marsudi, announced that “the towing and the shooing (away of boats) is not going to happen” any more.

“We also agreed to offer them temporary shelter provided that the resettlement and repatriation process will be done in one year by the international community,” Anifah said.

Malaysia is also pressing Myanmar to address the mounting crisis.

Almost 1,800 migrants have been intercepted by Indonesian authorities or plucked from the sea by fishermen in western Aceh province–many in a desperate condition.

On Wednesday, more than 400 Rohingya were rescued by fishermen from a green wooden boat, whose fate had captured worldwide attention after harrowing scenes emerged of desperate migrants pleading for help when the trawler was found by media floating off Thailand.

Fishermen rescued around 800 boatpeople from at least one vessel on Friday, with survivors recounting grim tales of deadly fighting between rival groups of migrants that left at least 100 dead.

The first boat to arrive off Aceh was on Sunday, May 10, when around 560 migrants were dumped in shallow waters and told to swim to shore.

The Indonesian navy also towed away one migrant vessel carrying 400 migrants last week, and said it had turned back another.

The boat that was found off the Indonesian coast on Wednesday was the same one spotted adrift last week several kilometers off the Thai tourist resort of Koh Lipe.

Authorities dropped food and water into the sea from a helicopter, prompting a desperate scramble to retrieve the packages.

Some of the visibly weak migrants said they wanted to go to Malaysia and the Thais fixed their broken engine and pointed them south.

Contact was lost with the boat late Saturday, raising fears for the welfare of those on board as the vessel was bounced between Thailand and Malaysia. It was eventually spotted late Tuesday by Aceh fishermen, who rescued the migrants the following day.

Chris Lewa, from the Arakan Project, which monitors migrant journeys across the Bay of Bengal, said the migrants had been repeatedly towed out of Thai waters and forced at gunpoint to leave Malaysian waters.

Coastal towns along Bangladesh’s Cox’s Bazaar district and Myanmar’s Rakhine State are the starting point for most migrant journeys.

A trawler with 116 Malaysia-bound migrants was found adrift off a small island, near the Myanmar border.

Seven Bangladeshi nationals were rescued this week off the Myanmar coast after they were thrown from a fishing trawler packed with migrants heading to Malaysia.

Small vessels carry migrants out to larger “cargo” boats moored in international waters, which head towards Southeast Asia when full.

Lewa of Arakan Project said her contacts had told her that five cargo vessels left in early May headed east.

Two remain moored in the Bay of Bengal but are not thought to be taking on any more people at the moment, she added.

Bangladeshi police have killed several key players in the trade, while dozens of lower level people smugglers have been rounded up.