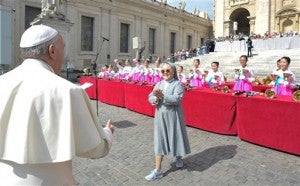 Members of a South Korean musical band perform as Pope Francis, left, arrives for his weekly audience, at the Vatican, Wednesday, May 20, 2015. Francis called Wednesday on Chinese Catholics to remain attached to the “rock” on which the Church in Rome is built, in a move expected to rile Beijing. L’OSSERVATORE ROMANO/POOL PHOTO VIA AP

VATICAN–Pope Francis called Wednesday on Chinese Catholics to remain attached to the “rock” on which the Church in Rome is built, in a move expected to rile Beijing.

“Ask Mary to help Catholics in China… to live spiritually united to the rock of Peter on which the Church is built,” the pontiff said in his weekly general audience in Saint Peter’s square.

Francis was speaking ahead of a May 24 day of prayer for Catholics in China, which was established by his predecessor Benedict XVI in 2007.

With his reference to Peter, whom the Roman Catholic Church considers to have been the first pope, he was calling on Chinese Catholics for their allegiance.

The Vatican has not had diplomatic relations with China since Mao Zedong broke them off in 1951.

On a visit to South Korea in August, Francis called for a normalization of relations.

But he insisted that could only happen if China’s Catholics are given the right to exercise their religion freely, and when the Vatican is allowed to appoint bishops in the world’s most populous country.

On his way back from Korea, Francis said he would visit China as soon as the Church was allowed to do its job there.

Researchers say there are about 12 million practicing Catholics in China, half of whom attend services under the auspices of a state-controlled association.

The other half are involved in clandestine churches that swear allegiance to the Vatican.