Arrest of 3 Makati execs held in abeyance until Monday 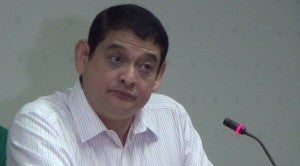 Senator Teofisto “TG” Guingona III, chairman of the Senate blue ribbon committee, on Wednesday ordered the Senate sergeant-at-arms to hold in abeyance the arrest of three officials of the Makati City government.

Villas and Aldon were among the 14 resource persons ordered arrested and detained  by the chamber Tuesday for continued refusal to attend the Senate blue ribbon subcommittee’s hearings on the allegedly overpriced Makati City Hall 2 parking  building while the arrest for Dela Peña had been issued earlier by the chamber.

READ: 14 resource persons in Senate’s Binay probe ordered arrested, detained
But in separate letters to Guingona this week, the three promised to attend the subcommittee’s next hearing scheduled on May 28, 2015.

“I’m giving the three persons so named up to Monday to appear before the office of the blue ribbon before the director general, personally  appear and make a verbal and written pledge undertaking that they shall participate in subsequent to blue ribbon hearings,” he  said.

“In the meantime because of the letters and the undertaking they have manifested in the letters, the director general is hereby directed to inform the Senate sergeant-at-arms to  hold in abeyance the implementation of the order of arrest of the three persons namely Danilo Villas, Vissa Marie Aldon and Engineer Line dela Peña until Monday or until they have complied with the conditions laid down,” he said.

“If they have complied with the conditions laid down then the committee will meet again and lift the order of arrest for the three so named persons,” the senator added. IDL