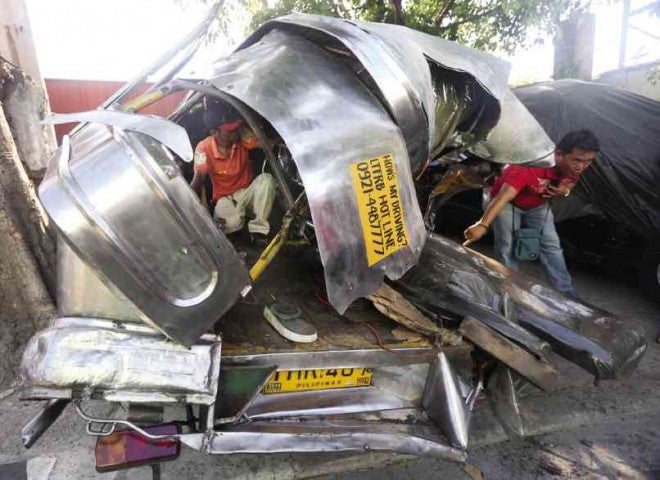 CRUSHED ON COASTAL The jeepney’s driver fled and his 28 injured passengers had to be pulled out carefully from this gnarled heap of metal after a three-vehicle smashup on Coastal Road in Las Piñas City on Tuesday. MARIANNE BERMUDEZ

THE POLICE are looking for the driver of a passenger jeepney who figured in a three-vehicle smashup that left at least 28 people injured on Coastal Road in Las Piñas City Tuesday afternoon.

Still unidentified at press time, the driver of the jeepney (THR-487) fled after the accident that also involved two passenger buses on the northbound lane going to Baclaran.

The packed jeepney was reportedly hired for a group of people coming home from a funeral wake, and was approaching the toll gate around 1:30 p.m. when one of its tires burst.

Senior Insp. Albert Arevalo, chief of the city police traffic unit, said that as the jeepney made a sudden stop, an oncoming Saulog bus (UWL-696) driven by Romnick John Pintor slammed into the jeepney’s rear.

“Because of the impact, the jeepney fell on its left side and its roof was almost detached from the body,” Arevalo said.

The jeepney then hit another bus—a Jasper Jean unit (TYF-886) driven by Federico Jemone—that was in front of it.

Senior Supt. Alfonso Samala, the city’s chief of police, said all 28 passengers of the jeepney suffered injuries and were brought to San Juan de Dios hospital in Pasay City for treatment. None of the bus passengers were hurt. Kristine Felisse Mangunay