Drilon: Binay not immune from lawsuits 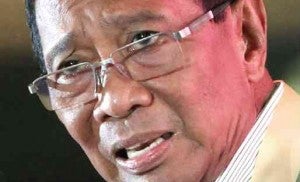 Senate President Franklin Drilon contradicted on Tuesday a lawyer’s statement that Vice President Jejomar Binay was immune from suits, saying that “no one is above the law.”

Drilion said it would be difficult to accept the argument of University of the Philippines law professor Harry Roque Jr. that any case that would be filed against the Vice President would be dismissed since he was enjoying immunity from lawsuits while in office.

(That kind of argument is a bit hard to accept because in our democracy, we are all equal under the law. Whether you are rich or poor, powerful or ordinary citizens, if you  have violated the law then  you should be held liable)

(No one is above the law. Under the theory of Professor Harry Roque, if you stole from the people, you can’t be charged as long as you’re an impeachable officer. I do not agree with it and that’s a violation of our basic principle of justice because we are all equal under the law. If we committed a crime, then we should be held liable. No one is above the law)

In his blog, Roque also said that the Anti-Money Laundering Council’s (AMLC) petition  to freeze Binay’s assets and any court action to declare these funds as proceeds of crimes would violate the Vice  President’s immunity from suits.

The Court of Appeals has reportedly granted the AMLC petition and subsequently ordered to freeze the bank accounts of Binay, his wife and  son, and some of  his alleged dummies. IDL