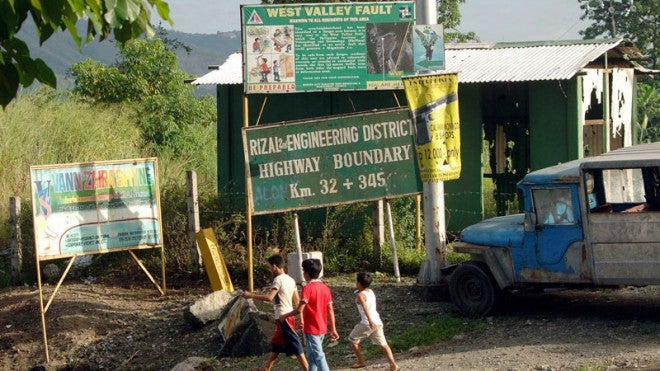 RAISING ALERT A warning sign posted by the Philippine Institute of Volcanology and Seismology stands on the road near the boundary of Rodriguez, Rizal province, and Payatas, Quezon City, advising residents living in the danger zone to vacate the areas transected by the West Valley Fault. INQUIRER PHOTO

Now you can check for yourself whether your house, or planned house, lies along or near an active earthquake fault line in Metro Manila.

The Philippine Institute of Volcanology and Seismology (Phivolcs) has made public updated and detailed maps that trace the 100-kilometer West Valley Fault traversing parts of Metro Manila and the adjoining provinces of Bulacan, Laguna, Rizal and Cavite.

This active fault line system has the potential of generating up to a 7.2-magnitude earthquake that can devastate the capital and nearby provinces.

The product of two years of work by a small team of Phivolcs geologists, the 120-page book titled “Valley Fault System in Greater Metro Manila Areas Atlas” has a total of 33 maps for the 19 cities and municipalities transected by the fault line.

Phivolcs Director Renato Solidum Jr. said the agency updated the maps of the fault line because the last maps it issued for Metro Manila in 2000 provided only a bird’s eye view, with a 1:10,000 map scale, that most people found it hard to locate their homes relative to the fault line.

The new maps for Metro Manila have a 1:5,000 scale so they show the subdivisions and roads relative to the fault line and fissures.

“You can actually see the streets,” Solidum said during the official book launch on Monday.

Due to limited production, copies of the atlas would be given to affected local government units (LGUs) and state agencies but Solidum said the public can download the maps from their website www.phivolcs.dost.gov.ph.

“You can use this if you want to know if you are near a fault. It’s good to have this data out to the public to let them know about (earthquake risks),” he said.

He said the new survey discovered new fault traces aside from those previously mapped.

Since there is no early warning when or where an earthquake occurs, Phivolcs has been calling for public preparedness through earthquake drills and contingency plans and checking the structural integrity of homes and buildings.

In the 2013 bulletin, Solidum said the projected risk analysis for a 7.2-magnitude earthquake in Metro Manila and five Rizal provinces was 37,000 fatalities, 140,000 serious injuries and total economic loss of P2.5 trillion with 11 million square meters of floor area severely damaged.

A total of 8,200 people were killed in Nepal in a 7.8-magnitude earthquake on April 25 and a 7.3-magnitude on April 16, according to wire service reports.

Phivolcs geologists literally walked the danger zone to validate the fault traces, which could be as narrow as less than a foot wide to up to several feet wide.

However, the maps for Laguna, Cavite, Bulacan and Rizal were still of the bird’s eye view kind since the National Mapping and Resource Information Authority did not have detailed base maps for them.

As expected, Solidum said many areas along the fault line had already been settled.

He said it was the task of LGUs to inform the affected residents and not allow further property development in places at risk.

Phivolcs recommended that the area at least five meters from either side of the fault line should be cleared of any development.

But of the 19 concerned LGUs, only Quezon City, Pasig City and Makati City have coordinated with Phivolcs to put markers or signs along the fault line.

“We encourage local government units to put the markers,” Solidum said, adding it was not Phivolcs’ job to put these up.

“It’s very important for LGUs to make sure houses and buildings are not located on active faults,” he said.

He said the geologists found no major commercial sites, no high-rise buildings and condominiums or hospitals sitting on the fault line.

Parts of the South Luzon Expressway show fissures but the highway does not run along a fault line, he said.

Fewer than 10 schools have been informed that they are in the danger zone, Solidum said.

“We told them they can use the buildings but they should not let their students use them. It’s up to DepEd (Department of Education) to check whether that’s followed,” he said.

Antonio Bernardo, chief executive officer of the Housing and Land Use Regulatory Board, said the agency did not give permit to housing developers unless their project sites had been certified by Phivolcs to be far from the fault line.

But Solidum said Phivolcs could only check on the planned housing or business site if their developers apply for clearance. “If they don’t ask, we won’t be able to know about it,” he said.

“There should be someone (from the local government office) closely monitoring the actual construction,” he added.

The other segment of the Valley Fault System, the 10-kilometer East Valley Fault which can generate up to a 6.2-magnitude earthquake traverses Rodriguez and San Mateo in Rizal.