MANILA, Philippines – If the 7.2-magnitude earthquake that jolted Visayas and Mindanao early this week would happen in areas in Metro Manila and nearby provinces that are sitting along the West Marikina Valley Fault, it would cause P2.4 trillion damage to buildings and kill 37,000 persons, a study showed.

The results of the risk analysis project, a three-year collaboration of the Australia and Philippine governments, said that a simulated quake event would affect 1,100 hectares of floor area with collapsed structures, and probable fatality of 37,000 persons.

The study was presented on Thursday at the Launch and Handover of Multi-hazard and Risk Maps for the Greater Metro Manila Area held at Crowne Plaza in Ortigas. It was also the International Day for Disaster Risk Reduction.

Eighty-seven hazard and risk maps were handed over by the officials to 24 local chief executives in Greater Metro Manila Area. Also handed over was the exposure database containing physical information, population and socio-economic characteristics of communities. 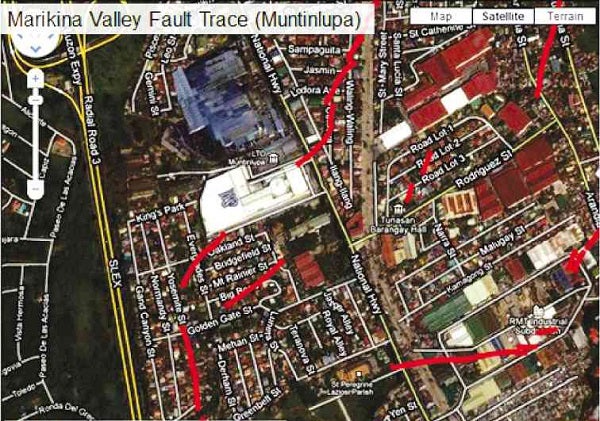 Data presented by Philippine Institute of Volcanology and Seismology chief Renato Solidum said that a 7.2 earthquake in Manila and nearby provinces would kill at least 37,000 persons.

“The Philippines is prone to hazards including earthquakes due to its geological location. It is in the Pacific Ring of Fire, and it is prone to volcanic eruptions and earthquakes…,” he said.

Solidum said the fault moves every 400 years on average. It last moved 355 years ago.

The maps take into consideration details such as population, existing infrastructure and other area characteristics. These would show an assessment of the potential damage to life and property, or in other words, “disaster risk.” The maps also show increasing risks for various earthquake, severe winds and flood scenarios.

He said collectively, the people and the government could create better risk reduction and management plans.

“The local government units and the local chief executives must know the hazards and risks in their respective communities. Records have shown and experiences have proven – from Ondoy, Pepeng, Habagat, Maring and the 7.2 magnitude earthquake in Bohol last Tuesday — that disaster can strike anywhere. Measures must be taken to reduce vulnerabilities and to minimize threats,” National Disaster Risk Reduction and Management Council Executive Director Eduardo del Rosario said.

“We may not be able to prevent disasters, but we can empower ourselves and our communities to reduce casualties and damages to properties and economic resources,” he added.

Meanwhile, Australian Ambassador to the Philippines Bill Tweddell said natural hazards do not have to lead to disasters especially if people are able to carefully assess the risk of an area and properly plan for the long-term.

“But we can only do that if we have date. The Australian Government is pleased to have worked closely with the Philippine Government in producing these maps which can now help us prepare for such scenarios,” Tweddell said.

The study cost AUD5.5.million and was funded by the Australian Agency for International Development with the technical support from Geoscience Australia, and led by the government agencies under the Collective Strengthening of Community Awareness on Natural Disaster — composed of the Office of Civil Defense, Mines and Geosciences Bureau, Philippine Atmospheric Geophysical and Astronomical Services Administration, Phivolcs and National Mapping and Resource Information Authority.

At the end of his presentation, Solidum recited a poem he composed to emphasize his point:

“..Buildings will not crumble/ and people inside will not stumble/ in the very near future all the communities are resilient/ and they will say that they are ready to rumble with the temblors/ but we’re ready to deal with Metro Manila’s concrete jungle.”